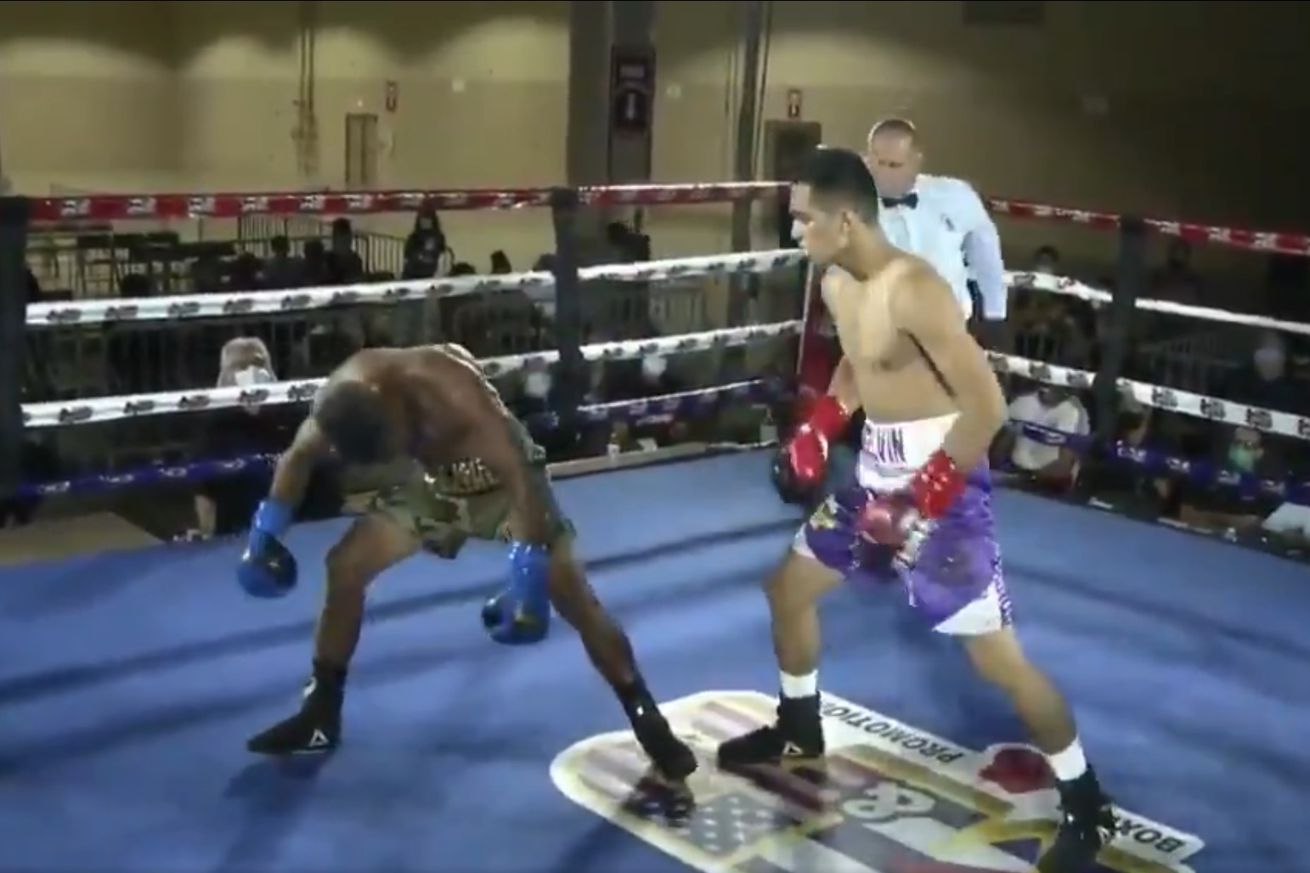 Yeison Vargas is stunned by a Melvin Lopez power punch at a boxing event in Miami on Thursday | @Hock1717, Twitter

We have some catching up to do, don’t we? There’s a cornucopia of clips this week and plenty of MMA to consume, but first we’ll start off with a highlight from the boxing world that will transport you back to the magical, idyllic time of 2016…

Remember the Mannequin Challenge? One of those wacky memes that was really clever the first time you saw it and gradually more cloying with each new version that came out? Well, it’s not back in full force, but Melvin Lopez did turn Yeison Vargas into a statue at an M&R Boxing Promotions show in Miami on Thursday.

Knockout of the year contender in Miami! 22yr old Nicaraguan Melving Lopez (23-1, 14 KO’s) absolutely folds Yeison Vargas (17-5) in their bantamweight contest for a TKO-1 victory. Thankfully, Vargas left the ring under his own power and looks to be OK. pic.twitter.com/Q3RVZDWhkI

That man is frozen until he hits the canvas. The only thing that would have made this finish crazier was if Vargas sprang back to his feet in reverse like a scene from Tenet.

Not to be outdone, the K-1 World GP 2020 from Osaka, Japan, this past Tuesday featured a handful of KOs that aren’t just contending for Best of the Week, but maybe Best of the Year.

While you were sleeping, Taio Asahisa (@tarzanboy921) executed maybe the most brutal high kick KO of the year #k1wgp pic.twitter.com/8LFzbJ1Yue

Should have attached an NSFW warning to that one.

In a 65-kg title fight, Hideaki Yamazki would not be denied the KO that he so desperately craved and he hunted Rukiya Anpo down until he could detonate his chin with a left hand bomb.

Lastly, Hiromi Wajima’s low kick KO of Raseasing Weerasakreck might not compare to the previous two, but I don’t know if I’ve ever seen someone seemingly stunned into unconsciousness by a kick across the thighs (?).

All you readers with a PhD in human anatomy, feel free to explain this one to us.

Over at Rajadamnern Stadium (free replay available on YouTube) in Thailand on Thursday, Petsukhumvit authored a more traditional leg kick finish when he kicked Pakkalek’s leg out of his leg.

Petsukhumvit cuts down Pakkalek with razor-sharp low kicks and stops him in round four of today’s Rajadamnern main event. pic.twitter.com/sOcTYAYWuu

As the old adage goes: If at first you don’t succeed, kick kick again.

Getting back to MMA, UFC vet Felipe Silva ran into a buzzsaw at Brave CF 41 last Thursday, walking right into a lights-out punch from Sam Patterson.

What a KO. Sam Patterson catches Felipe Silva cold rushing in with a right hand, KO’s the Brazilian in R1 #bravecf41 pic.twitter.com/G7vO5hZNfR

Great job by the referee there who instantly recognized that Silva had no clue where he was and jumped in there to pull Patterson off of him. This has been a rough stretch for Silva, who was taken out in just 44 seconds in his previous outing.

Getting back into the thick of things with its first post-outbreak shows is Cage Warriors, which is holding three events on back-to-back-to-back days, starting with Cage Warriors 114 yesterday (available on UFC Fight Pass).

The official time of this finish is 0:28 of round one, meaning it took Khalid just seconds to latch on to Stanton, move into position for the anaconda choke, and cinch it in to the point that Stanton didn’t know how much trouble he was in until it was too late.

As impressive as that was, coming in a close second for the best finish from Cage Warriors 114 is Jake Hadley. “White Kong” improved to 6-0 with a body kick on Shajidul Haque that looks like it might have been partially blocked, but not enough to stop Haque from crumbling.

The King of Violence, indeed
Jake Hadley has THAT power

Is he next for the winner of tonights main event? #CW114 pic.twitter.com/UIE6XG3Baz

Hadley improved to 6-0 and he’s just 24 years old. It sounds like he’s next to challenge for the flyweight title against Luke Shanks, who won it from Samir Faiddine later in the evening.

While you’re kicking it on Fight Pass, why not check out the latest from Cage Fury FC and Legacy Fighting Alliance, two promotions that recently resumed operations. At Cage Fury FC 85 last Friday in Tunica, Miss., we saw Zulkarnaiyn Kamchybekov show some beautiful hands and then some terrible fight IQ.

He can’t possibly have been aiming for anything other than the top of Mike Anderson’s skull.

Fortunately for Kamchybekov, the blow was ruled to have connected around the shoulder and neck so it was not considered an illegal strike. That’s a small comfort for Anderson, who went on to be finished in the third round anyway.

At LFA 91 in Sioux Falls, S.D. two weeks ago, we saw a pair of notable finishes that had to be recorded in the hallowed halls of Missed Fists.

Hailey Cowan entered this show with a ton of hype behind her and justifiably so. She seems destined for the UFC with a little more seasoning. Her matchup with Kelly Clayton (just 1-2 prior to fighting Cowan) proved way too spicy though as she fell prey to the Hype Curse that has befallen the likes of Edmen Shahbazyan, Sean O’Malley, and Maycee Barber this year.

Shades of Tito-Ortiz Ryan Bader there. Way to make the most of an opportunity, Ms. Clayton!

The best LFA 91 finish though came courtesy of Josh Quinlan, who stole this week’s “Humpty Dumpty” award with this ending sequence that had Pete Keepers breaking out the robot (RIP Ryan Jimmo).

Who brought ice skates into the Octagon? Wow! #LFA91 pic.twitter.com/SsZVfvbDzt

MMA SERIES-14 went down in Kalingrad, Russia, last Saturday, promoted by Fighting Championship Pankration. We bring this up because we couldn’t leave out our second body kick KO of the week, this one of the spinning variety by Dmitriy Shestakov.

Dmitry Shestakov spinning back kick to the liver #MMASeries14 pic.twitter.com/RQfsqhWyPD

Note the delayed reaction. Saygid Abdulaev’s brain was telling him, “We got this!” and then his body immediately replied, “Big nope there, bud.”

Mexico has a long and proud history of producing standout boxers, but they’ve apparently got their jiu-jitsu on track down there too. Case in point, here’s Daniel Zellhuber from LUX 010 in Nuevo Leon breaking out a lovely calf slicer against Miguel Arizmendi last Friday.

Daniel Zellhuber with a calf slicer. Wish there was a better angle. #LUX010 pic.twitter.com/1QqaPsb1q1

Maybe even better than that was Francesco Patron Manzo’s toe hold of Benjamin Mendez Salmon.

Of course, the card wasn’t without its standup thrills. Pedro Pena rushed Andres Farrera like a young Phil Baroni in what was a memorable pro debut for both men (for different reasons), while Jose Armendariz dropped Jonathan Saavedra with a KO shot from the hip.

Brutal KO by Pedro Pena, swarming Andres Farrera with a barrage of punches before slumping him against the cage. KO1 #LUX010 pic.twitter.com/7PnVVhfcV3

Damn. LUX 10 starts off with a bang. Jose Armendariz absolutely crushes Jonathan Saavedra with a left hand to the jaw. KO1 #LUX010 pic.twitter.com/z5jGkPO6XI

Speaking of newcomers, amateur Cyrille Manga had a miserable time of it when he fought Imam Batsaev at Enfusion Cage Event Rookies in Alkmaar, The Netherlands, last Friday.

Not really sure what Cyrille Manga was doing, but interesting KO by Imam Batsaev nevertheless pic.twitter.com/iaiM7HyO9H

It’s unclear if Manga was looking to grab the cage to keep from falling or if he was just completely dazed or if he thought he might be able to actually tear through the fence and escape. Whatever was going on, it ended in his doom.

If you want to find out more yourself, you can check out the pay-per-view show on Facebook for the low, low price of 99 cents.

Nobumitsu Osawa vs. Max The Body

For their names alone, you that know Nobumitsu Tyson vs. Max The Body (known as Mark Moleke at one point in his life, apparently) from Shooto 2020 Vol. 6 in Tokyo last Saturday was making the Missed Fists cut. It doesn’t hurt that Mr. Tyson’s looping left hand KO was pretty sweet.

Osawa just catches him at the end of the punch. I guess The Chin of The Body wasn’t quite up to snuff.

Congrats to Missed Fists alum Ludovit Klein, who makes his UFC debut this Saturday at UFC 253 on a week’s notice on the back of two hellacious head kicks that just so happened to be featured here in editions past.

Unfortunately, Klein missed weight for his featherweight fight with Shane Young, which puts a slight damper on the occasion, but that matchup is still a can’t miss one and you get the sense that Klein is going to end up in another highlight clip one way or another.

Until next week everyone, remember to always carry yourself with the same grace, dignity, and aplomb of K-1’s Taro.

And the exit. It’s a rough life for Taro. #k1wgp pic.twitter.com/7E1I8xHnC4