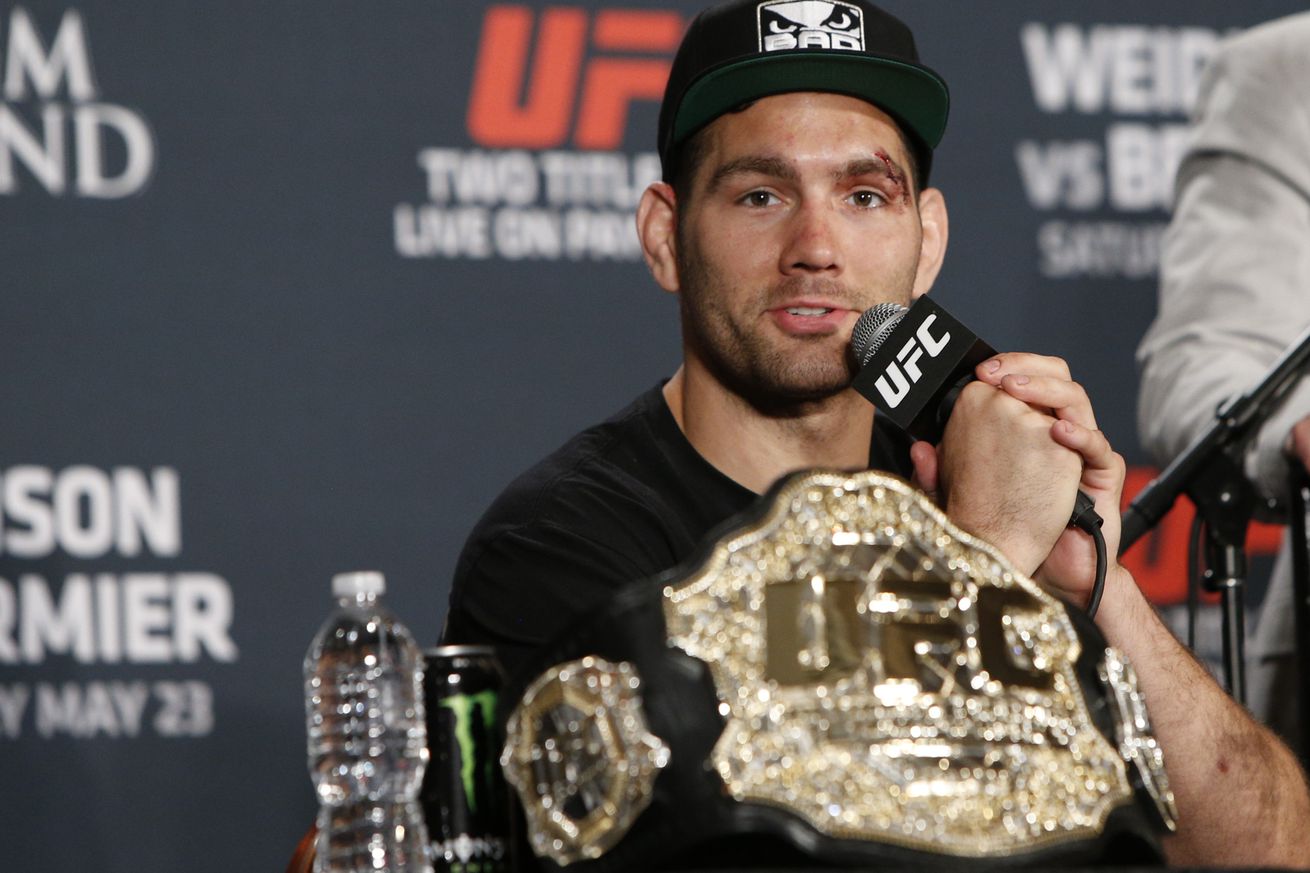 It wasn’t all that long ago that some fans were calling for Chris Weidman to hang up his gloves for good. Now, the former UFC middleweight champion is back in the win column and calling for another shot at the title.

Earlier this week, Chael Sonnen improbably proffered that Weidman posed the biggest threat to current champion Israel Adesanya’s reign and Weidman went on Sonnen’s Beyond the Fight program to explain why he thinks he matches up well with the champ.

“Absolutely (I can beat Adesanya),” Weidman said (h/t MiddleEasy). “I think that’s a tailor-made matchup for me. Those athletic strikers, tall lanky guys, I’ve proven that I can beat. I think pressure, wrestling, heavy punches and kicks…just nonstop pressure is what you need to beat them. That’s the recipe that beats those guys. I’ve proven that with Anderson Silva twice, Uriah Hall another one. Those guys are in trouble against me.”

Unfortunately for Weidman, his fights with Silva and Hall were seven and 10 years ago respectively and a lot has happened since then, including Weidman getting knocked out five times in his last seven fights. But that isn’t stopping Weidman from making his case for a title shot.

“I think that’s an exciting fight to make,” Weidman said. “If you look up and down the rankings, I don’t think there’s too many other fights that can excite people the way our narratives could work, and what I bring to the table. It’s not any bullsh*t, it’s just facts.

“If you’re into MMA and you really understand the game, you look at my game and you know I present some serious trouble for Adesanya, and more than anybody’s ever had in the past. He hasn’t really fought any other great, accoladed wrestler, other than Yoel Romero who doesn’t use his wrestling so I don’t even count that. I’m the type of guy that will bring that pressure, and I will take him down and ragdoll him on the floor.”

Realistically, for Weidman to get that chance, he’ll need to get at least one more win. In August he took a unanimous decision over Omari Akhmedov to finally get back on the winning track, but he’s still only ninth in the UFC’s middleweight rankings. Meanwhile, Adesanya, who just knocked out Paulo Costa last weekend, is looking at potential matchups with Jared Cannonier or Jack Hermansson as his likely next title defense.

Top 5 KOs of Justin Gaethje in the PFL.

Heavy Hands. Discussing the fallout from the big fights at UFC 253.

The Bash. Discussing Israel Adesanya plus interviews with Mason Jones and Artem Lobov.

Smaller dogs often bite off more than they can chew. This is one of my fave moments in fighting. Having a man realize it’s too late to unfuck himself. Locked in a cage but you wish you could… Run for your Life 2 weeks of #lockdownwiththeskinnyclown #letthegamesbegin #jigsaw

I bet @stylebender is having a happy hump day….. @BorrachinhaMMA

And arguably the two best P4P fighters in the game. Impressive.

Naija to the world. We just dey give dem small small ✊ #AndStill pic.twitter.com/Yp9bUbpJso

Jan is killing it.

DC calling me out of touch The only thing that was out of touch was consciousness from his body and that belt from around his waist. I get it, I’d hate me too

1. Dye my hair pink
2. Grow a pair of breasts
3. Convince the world Jon Jones is jealous even though he’s undefeated, incredibly successful and the youngest champion in the sports history.
4. Mentioned Jon Jones in all interviews but avoid fighting him at all costs

Oh it has, he just hides it real well. Dudes a straight bitch https://t.co/ulTeLtleBt

I know, and trust me I’m focused on the goal. Just tell your boy to keep my name out of his mouth and I won’t have to fry his ass up like this https://t.co/udF0smtyNT

Exactly what I meant.. Racking up wins over no one I’ve ever heard of. https://t.co/VoXCDZhJX2

I’m curious to hear what his father tells him when he asks about fighting me. I wonder if his father believes he’s ready? Eugene definitely doesn’t

Boss Logic made a better one.

Charity Event – @TheNotoriousMMA Vs @DustinPoirier 2! Great event with a great cause! pic.twitter.com/qIfVK3dXUu

Tony got a fight?