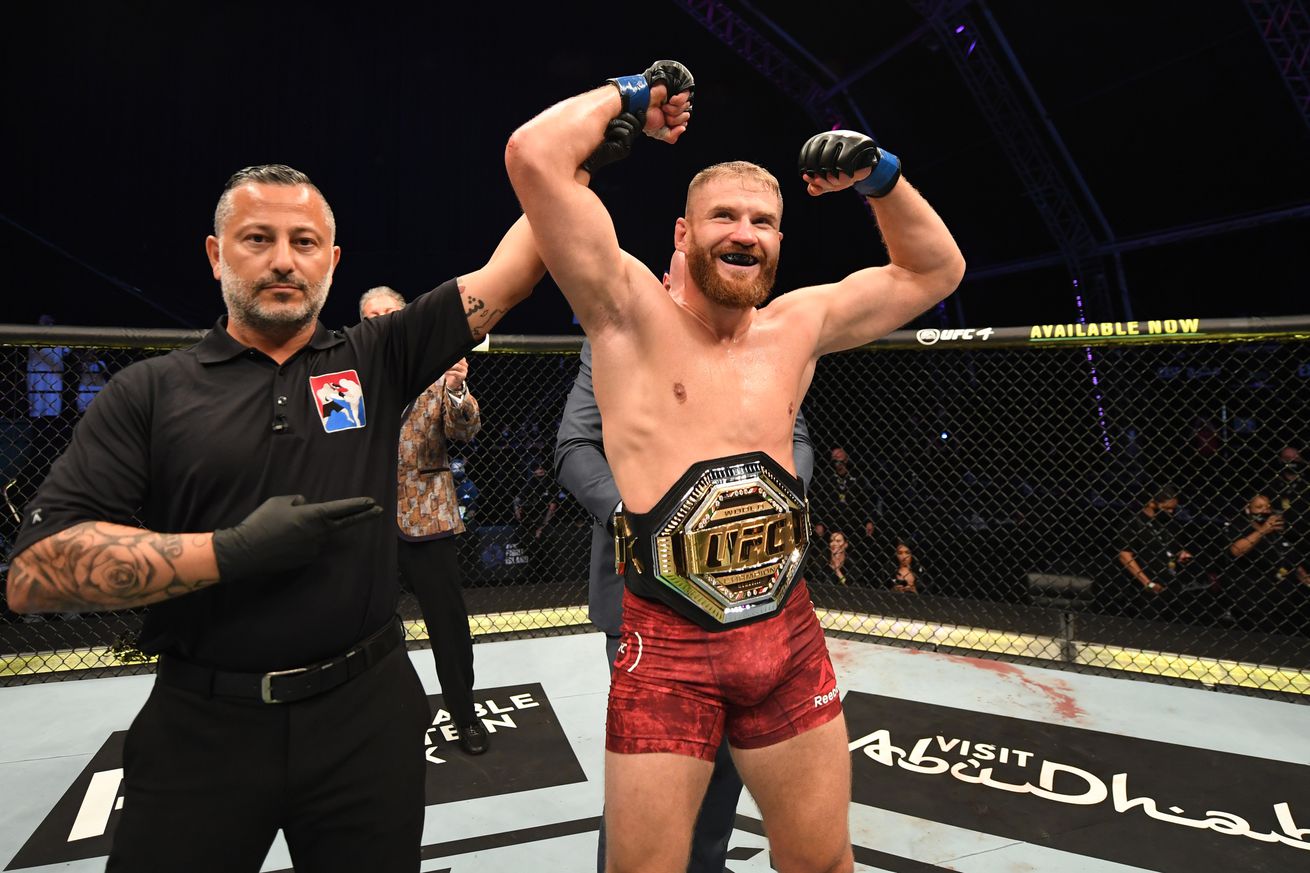 “For me, the best (opponent) would be Jon Jones,” Blachowicz told Submission Radio over the weekend. “But I think this is not real. It’s not gonna happen so I think that my next opponent is gonna be the winner between (Glover) Teixeira and Thiago (Santos). But also, Adesanya also is really good. So we will see. We’ll have to wait a little bit but for me, personally, the best would be Jon Jones. He promised me this fight after I knocked out Corey (Anderson) and I’m waiting for him. I believe in the future that I’ll catch him somewhere, some day, anywhere.”

Jones vacated his belt this summer, following a dispute with the UFC who reportedly wanted Jones to rematch Dominick Reyes instead of face Blachowicz. Jones won a close fight at UFC 247 that left many fans, and Dana White himself, believing Jones should have lost. So, instead of rehashing an old matchup, Jones decided to vacate his title to move up to the heavyweight division. For many fans, this was a long time coming, but for Blachowicz, it was an admission that the new crop of light heavyweight contenders was worrying the longtime champion.

Blachowicz has been on quite the run of late. The Legendary Polish Power has led to knockout victories in three of his last four bouts and, following his victory over Reyes, Blachowicz would have presented an interesting new challenger to Jones, were he still the champion. Perhaps that’s why, after UFC 253, Jones was quick to tease a return to light heavyweight just for Blachowicz. That has yet to lead anywhere though and instead, Jones has spent the last few weeks embroiled in a heated internet battle with middleweight champion Israel Adesanya. As fate would have it, Adesanya has also made claims about besting Blachowicz but the new champion says let “The Last Stylebender” try to do so. He’s already handed losses to two other middleweights who attempted to move up to 205 pounds.

“He can try but he’s gonna go back to his division really fast if he’s gonna do this,” Blachowicz said. “When he meets me, you know. It’s gonna be the same like with (Luke) Rockhold. Everybody thinks they know me. They think I’m an easy fighter, but when cage door closes, they feel my power. I’m a completely different fighter. They’ve never fought against someone like me but they have to feel it on their skin.”

Still, though he’d be willing to face the middleweight champion, Blachowicz says he’d prefer to slug it out with the former champion of his division. Not because he thinks he needs to to be considered the champion, but just because he wants to be the guy to finally end the dominance of Jon Jones.

“Yeah, I’ve got the belt but I just want to beat him,” said Blachowicz. “He’s never lost. Just one loss but that was a disqualification, it doesn’t count. I want to be the one who beat him in 205-(pound) division.”

Hey @danawhite, I’m waiting for your chicken in December. Give me your chicken or coming for dat ! #PAUSE! @PetrYanUFC #PaprChamp

I’m waiting for you dickhead. You will be held accountable for every word you said https://t.co/jxdLYchP26

Aww don’t worry. I’ll take that belt from you so that you don’t have a target on your back. It’ll be ok. https://t.co/H1q1hvzzHe

Statement on being on the wrong end of the most incredible KO ever.

@newmansa94 God bless you. It was an honor to step in the Octagon with you and to do what I love. Safe travels to you and your team Beautiful shot. Way to fight. I will improve. To the @ufc and all staff members thank you for making fight Island a possibility . You are a top notch organization. I know the best is yet to come. God is great and He has never failed me. Never will. He’s so faithful. I look forward to to the opportunity to getting back into the Octagon. Back to work. God bless you. Thank you to my Dad such a blessing to have you in my corner , @nanucosta , and @bryan_barberena for cornering you had me prepared. Thank you so to my @gymotribe for working with me. You all have a special place in my heart. The best is yet to come. • • “Yet what we suffer now is nothing compared to the glory he will reveal to us later.” ‭‭Romans‬ ‭8:18‬ ‭NLT‬‬ • • – Love Tshilobo ❤️ #ufcfightisland5

So we’re throwing spinning shit now…? these fighters are evolving I love it!!!

Well, now this is interesting.

On my way back to Florida! Time to work!

A hug from my mom and a beer with my dad. That’s the best reward #LegendaryPolishPower pic.twitter.com/YgznV6Wbkh

Any opponent yet? Where all the fighters at? #UFC254

You said it years ago @darrentill2 and you were right. You and me were meant to fight. I’m going up to middleweight and I’ll be small and fast and you’ll be big and slow. I’m gonna ruin your life. You’ll be spitting out teeth much sooner than expected…

25 tests. Never know when they are coming. Day, night, weekday, weekend…unpredictability of testing is the number one strength of UFC program. These 5 hit 25x mark in Sept without a blip. Clean athletes.@AlanJouban @LaurenMurphyMMA @ShogunRua @TouchNgo_ @TurboperezUFC

Jon Jones should return to 205, if only for the fight poster. UFC 260: Jan vs. Jon. Now that’s marketing gold.