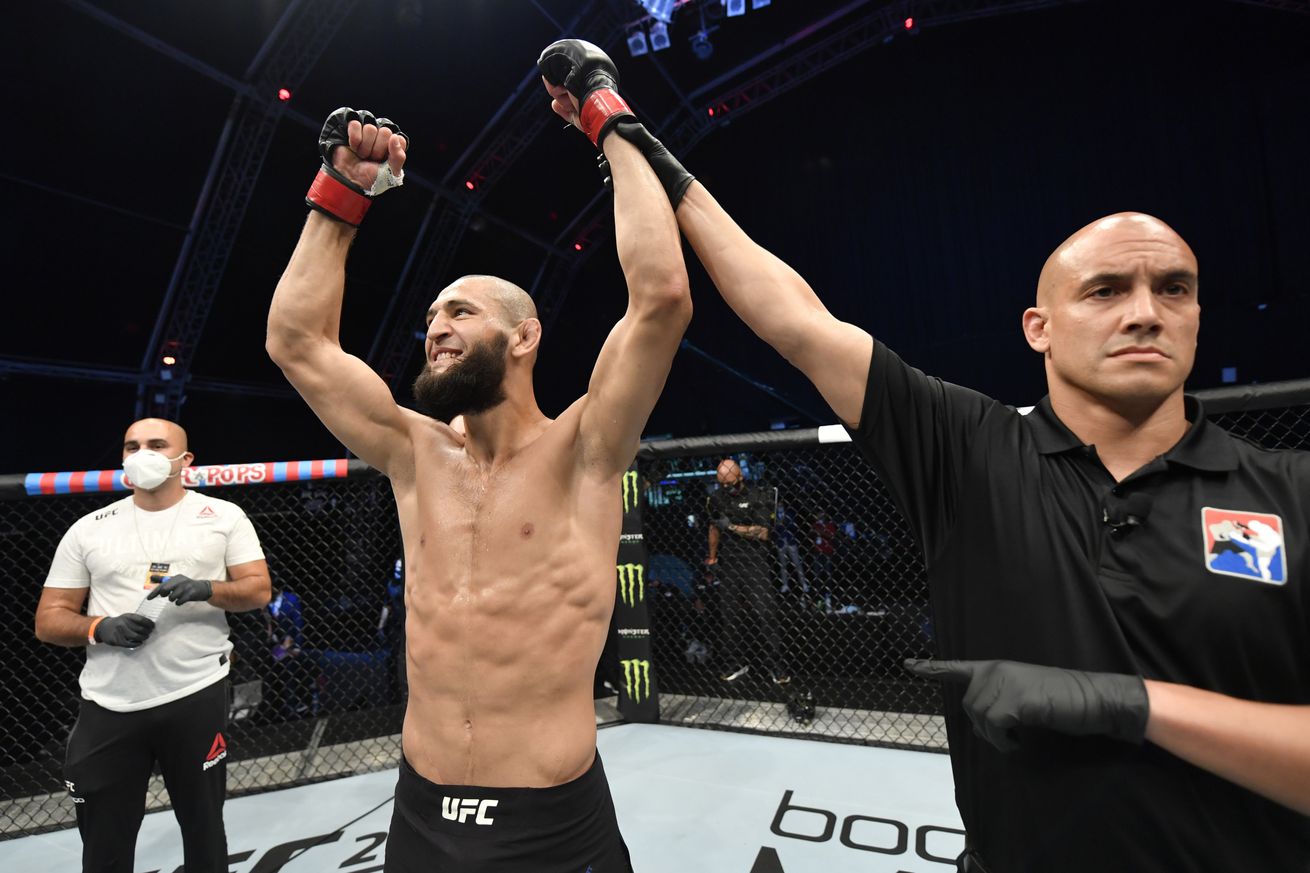 Khamzat Chimaev has been one of the brightest spots in the UFC this year. Making his debut in July, Chimaev submitted John Phillips at UFC Fight Island 1 and then turned around 10 days later to stop Rhys McKee with ground strikes at UFC Fight Island 3. The nature of his dominance, and his Russian heritage, immediately drew comparisons to UFC lightweight champion Khabib Nurmagomedov, but after knocking out Gerald Meerschaert in just 17 seconds at UFC Vegas 1 last month, Chimaev made it clear that he didn’t want to be compared to the lightweight champion, he wanted to be his own man. Well it appears that Nurmagomedov didn’t take any offense to that and is just as impressed with Chimaev as the rest of the MMA world.

Speaking at the UFC 254 Virtual Media Day, Nurmagomedov was asked his opinion on the UFC’s rising star and the lightweight champion was very complimentary of Chimaev, saying that he thinks Chimaev deserves a top-ranked opponent.

“I don’t know what the UFC is going to do with him, about his next opponent, but in my opinion, I think he deserves a top 10, top 15 (opponent),” Khabib said. “In my opinion, it’s top 10. He deserves a fight with someone very tough opponent, like five rounds. Then, after this one, he deserves a contender fight. This is my opinion.”

Chimaev was, in fact, supposed to have just that, actually. Heading into his fight with Meerschaert, Chimaev was also set to face sixth-ranked welterweight Demian Maia later this year. However, after his obliteration of Meerschaert, many fans questioned that matchmaking for Maia’s retirement fight. Now, instead, Dana White is targeting a five-round main event for Chimaev against a ranked opponent and Khabib thinks this is exactly what should happen for the budding star.

“Of course (I’m a believer in Chimaev). He finishes all his opponents,” Khabib said. “I think he deserves. . . Ali told me he’s gonna fight – because we have the same manager – Ali told me he’s gonna fight with tough opponent, five rounds in December. This is very interesting. Main event in the UFC, this is very good attention. Good opportunity for him and if he wins this fight, next fight I think he deserves next fight a contender fight.”

Chimaev is also of a similar mind, having called for fights with practically every big fighter at either welterweight and middleweight. A specific name has still not been announced but if Chimaev wins, he will only continue to add to an already historic 2020 campaign.

Khabib, meanwhile, has his own fight to be concerned about. He will defend his lightweight title against interim champion Justin Gaethje at UFC 254 later this month, in Abu Dhabi.

Future. Khabib Nurmagomedov unsure of future after Justin Gaethje, but Dana White has promised ‘something special’.

Beef. Israel Adesanya fires back after Jon Jones tweets about Adesanya’s father: ‘Dead or alive, keep my family out of this’.

Continued. Jon Jones responds to Israel Adesanya’s comments about his mother, reiterates challenge: ‘Are we still on for 2021?’.

Coward. Justin Gaethje trashes ‘total coward’ Colby Covington: ‘As a man, I would love to slap him right across the face’.

You are the best light heavyweight in the world only if you play me in a UFC 4. https://t.co/2G8uADzF2N

12 years in the company but he’s been teasing a move up to heavy weight the last 7 years haha boi plz.
Is he ready for heavyweight now? Is he really?

So Eugene will let you fight stipe but not me

My milkshake brings all the boys to the yard!
Damn right. pic.twitter.com/PhEXN38S6D

Just another reason why you would never beat me. No way my God would allow me to lose to a serpent like you https://t.co/QPeX4t29sD

Hey @JohnMakdessi your time ⏳ is running. You are 35 years OLD what you are waiting for ? No where to hide and . Let’s do this already @seanshelby @AliAbdelaziz00

If you talk shit you need to back it up. @JohnMakdessi you lost your balls? Where is the FIGHTER in you ???

Soon to be farewell.

Forever a samurai. But soon we will put the blade to rest. After discussions and careful consideration with my family, it has been decided that my next fight @bellatormma will be my last. To be fought at a catch weight of 175lbs. Opponent and location to be confirmed. Health before Wealth, and NEVER COMPROMISE YOURSELF.

Too long, didn’t watch- turns out I tore my ACL in camp, injured it more in my fight and now I need surgery. See you mid 2021 UFC fans ❣️

Let’s run it back @ufc pic.twitter.com/4dHaINIb0Z