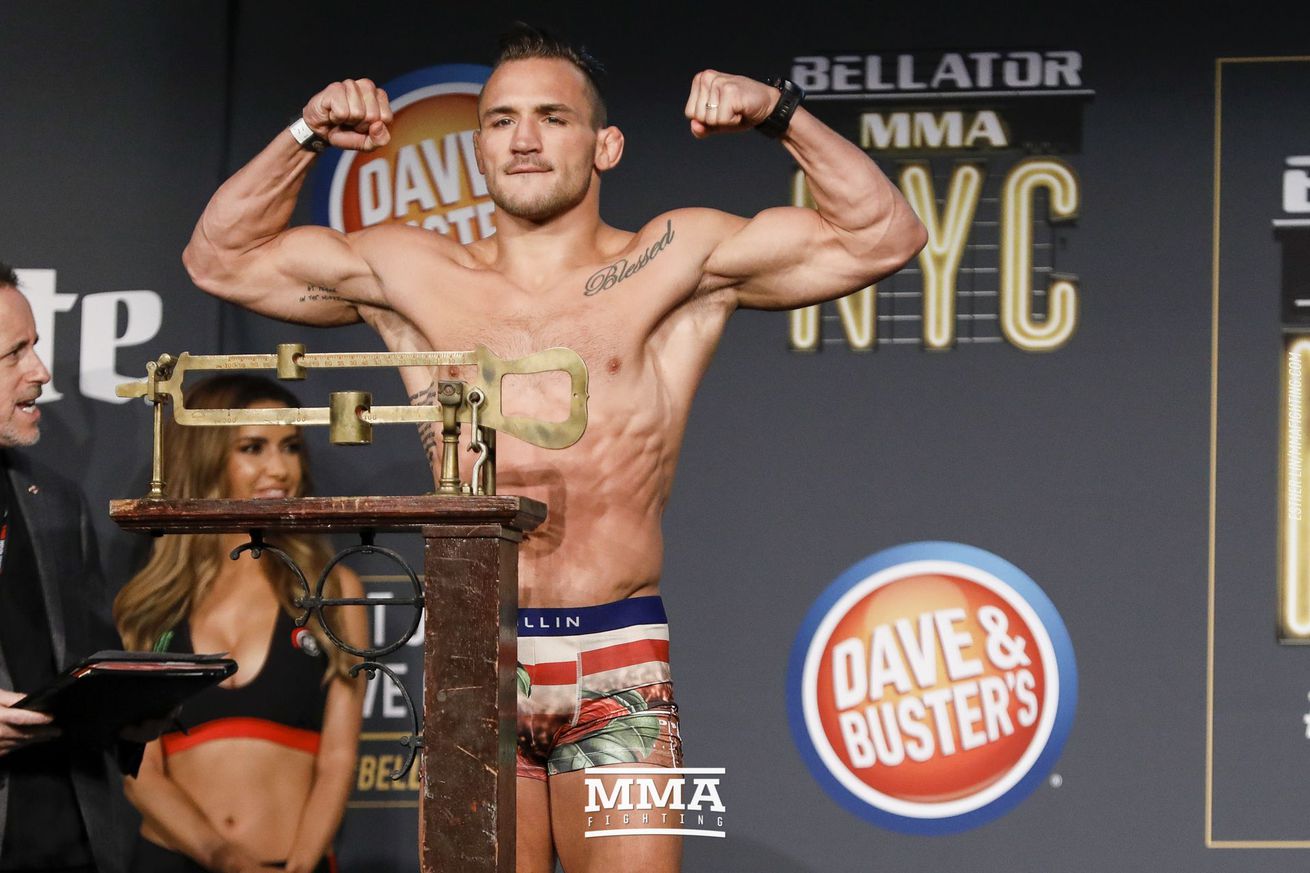 Earlier this month, Michael Chandler officially signed with the UFC and his UFC tenure is going to start out with a bang as the former three-time Bellator lightweight champion will serve as the backup for UFC 254’s lightweight title fight between Khabib Nurmagomedov and Justin Gaethje. But though Chandler is new to the UFC, he’s entering the promotion with all the confidence of a champion, even when faced with the prospect of his UFC debut potentially coming against arguably the most dominant fighter in the sport.

“I think I’m the better wrestler than he is,” Chandler said of Khabib Nurmagomedov on Instagram Live (h/t MMAJunkie). “That’s not to disrespect his wrestling. I think he has shown to be the most dominant wrestler in mixed martial arts, the most dominant wrestler in the world. What he does to guys, he comes forward with reckless abandon, pushes you against the cage, picks you up, put you down and puts you in the Dagestani handcuff. Full mount, side guard, crucifix, half guard or in your guard – the guy is dangerous everywhere. … I will say, he’s never, to my knowledge, fought a Division-I, high-level Division 1 wrestler. I don’t think he’s fought anybody who is a Division-I wrestling All-American. There’s just a different breed out there. There’s a different breed between a high school wrestler who got into mixed martial arts and stopped doing wrestling many years ago and a guy like myself, who was a Division-I wrestling All-American.”

The notion that Nurmagomedov has not faced any elite wrestlers is not a new one and is, in fact, why many people view his upcoming fight with Justin Gaethje as potentially his toughest fight to date. This is clearly something Chandler believes as well, and as he is a more accomplished amateur wrestler than Gaethje is, the former Bellator champion believes he could follow in the footsteps of Eddie Alvarez to claim the UFC title, if given the opportunity.

“The game plan against Khabib – he’s not going to take me down I don’t think,” Chandler said. “If he takes me down, he’s not going to hold me down. I’m going to be able to take him down unlike everybody else who has been up to fight him. As we saw in the Khabib versus Al Iaquinta fight, when he can’t take you down he starts to resort to a little bit of sporadicism, a little bit of – he gets off his game. A little bit of seeds of doubt get planted in his head because he knows he doesn’t have great striking, he knows his ability to win the fight is predicated on him being able to get in your face, to put you up against the cage and pick you up and hold you down. That’s the game plan: Don’t get taken down. But that’s everybody’s game plan. So I’m going to sit here and say I won’t get taken down. You guys won’t be able to see it until possibly Oct. 24, or somewhere down the line. Because I will be fighting Khabib Nurmagomedov for the title in the near future. Get ready for it.”

Then again, Chandler may not get the opportunity to face Nurmagomedov at all. Chandler is only serving as the back up and between Khabib and Gaethje, Khabib has been the one who has historically had some trouble making it to fights. But if that comes to pass Chandler says he’s ready for that outcome too, and that it may well lead to the greatest fight in UFC history.

“I think Justin Gaethje looked like the best lightweight on the entire planet on the night he fought Tony Ferguson in May,” Chandler said. “He was calm, he was composed, he was sharp, he was throwing combinations to try to take Tony’s head off, but he never got overzealous. He got dropped in the second round, went back to the corner, came back and still stayed composed. He fought like the best lightweight on the entire planet on that night. So the game plan would be, keep my hands up, keep my chin tucked and get into a fist fight with him. I think I can match his cardio, I can go step for step.

Of course, there’s the rub for Chandler. Though the possibility exists that he will be fighting for a UFC title in a little over a month, it’s more likely that he won’t be and instead he will just have front-row seats to one of the biggest events of the year. Still, Chandler is reportedly training as if he will be called on to fight at UFC 254 and will be flying to Abu Dhabi and making the championship weight limit of 155 pounds at weigh-ins just in case.

“My opponent is to be determined,” Chandler said. “I am the replacement fight, the backup fight on Oct. 24, the Khabib verse Gaethje card. I by no means want to see either of those guys not make it to the fight, obviously. It’s not good for them, it’s not good for the UFC. But, it’s always good to have a replacement, a fallback in order, and what better guy than me?”

Chandler is a former Division I All-American wrestler out of the University of Missouri and the former three-time Bellator lightweight champion. His current MMA record stands at 21-5.

Performance. Tyron Woodley addresses his loss to Colby Covington: ‘I don’t know what the f**k happened’.

Put out. Dana White: Tyron Woodley ‘should start thinking about hanging it up’.

To Pasture. Dana White: It’s going to break his heart, but Donald Cerrone and I need to talk about retirement.

Face off. Israel Adesanya, Paulo Costa face off in Abu Dhabi, keep it respectful before UFC 253.

Angela Lee’s best performances in ONE.

The 6th Round. Immediate post-fight analysis of UFC Vegas 11.

Scan of Tyron Woodley’s broken rib, courtesy of Woodley. He said it popped earlier in the fight and then tried to use the gulliotine to stand up and it popped again. “It was the most pain ever,” he said. He is back at the hotel resting.

They avoid to say my name but the boss @danawhite said over and over again I’m next! And I’m way hungry then all these guys! Can’t wait #andnew soon pic.twitter.com/ay2CJeNTZM

Dont worry I’ll take out the racist scumbag, December. Let’s see if @ColbyCovMMA joins the “I won’t fight Leon club” and goes running like the rest of them.@ufc @UFCEurope

Anyone thought Woodley quit? Or just me

Feels like I stepped on a damn lego last night! #UFCVegas11 pic.twitter.com/AMpjopFuD1

It was a true honor. Thank you all for the support #ufc #ufconespn #draw pic.twitter.com/NzZ94cOWhv

Well…. that was insane.

I appreciate all the love and support.

Looking forward to the next! https://t.co/ZQI1NedRTg

Man has a point.

It’s finally UFC 253 fight week! Izzy-Costa is an awesome fight and I, for one, cannot wait.