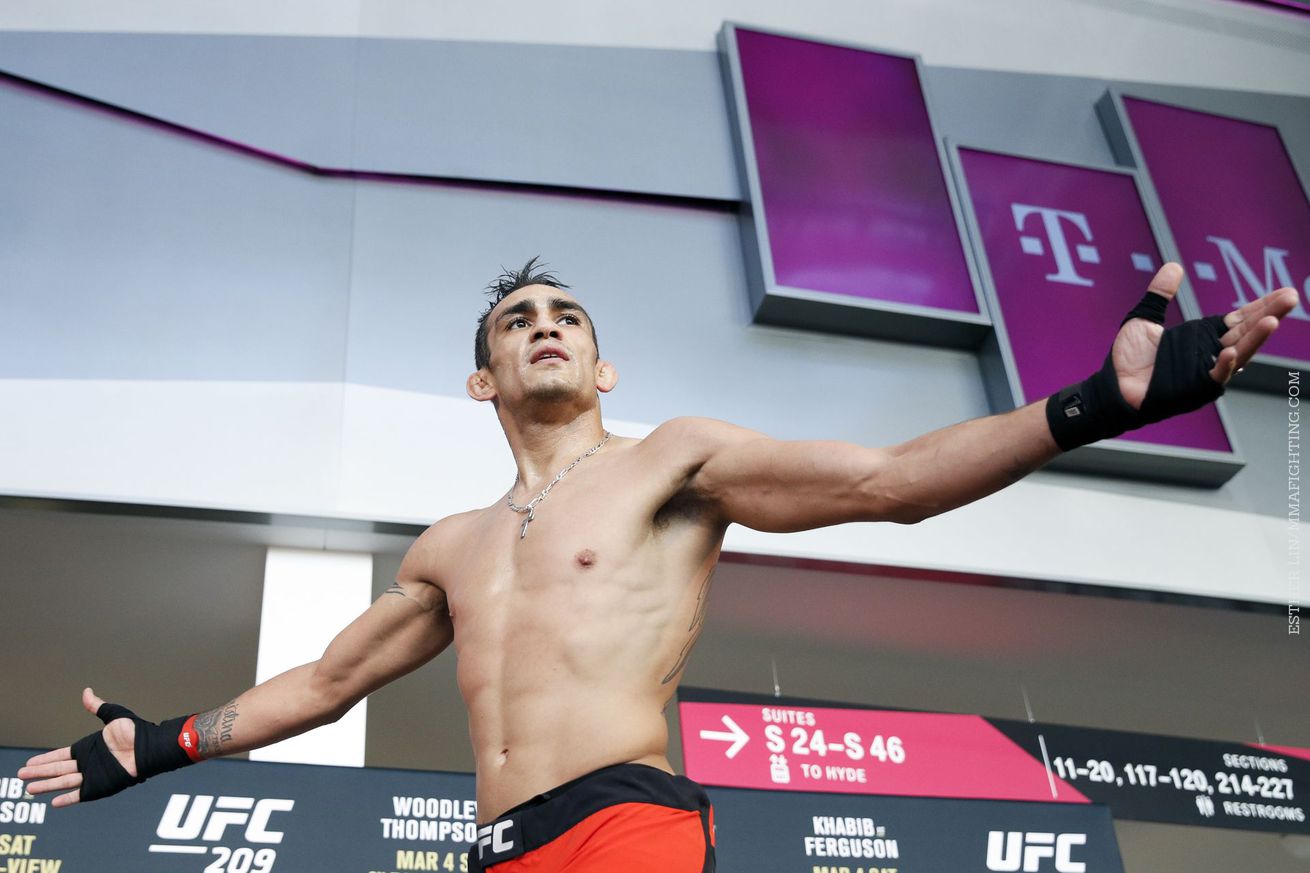 This weekend, UFC lightweight champion Khabib Nurmagomedov will defend his title at UFC 254 against Justin Gaethje. It’s the biggest fight of the year but it wasn’t always supposed to be the next fight for Khabib. For the better part of the last four years, Khabib and lightweight contender Tony Ferguson had been circling each other, both men putting together incredible runs in the division but apparently destined never to meet. Fate then seemingly closed the door on their fight for good when earlier this year, COVID-19 cancelled a fight between Khabib and Ferguson (the fifth cancellation), and Justin Gaethje stepped in and stopped ‘El Cucuy’ in the fifth round. Now it’s Gaethje who faces Khabib this weekend and many believe the Khabib-Ferguson fight is lost for good. Just don’t count Tony Ferguson among them.

Speaking with ESPN ahead of UFC 254, Ferguson dismissed the notion that he had lost his shot at Khabib, guaranteeing the two would fight at some point before it’s all said and done.

“I see fear in his voice if he thinks he has to talk bad about people,” Ferguson said. “He can’t put that sh*t in my head. I will fight Khabib at one point or another. He will see me before he retires. We’ll make that a point.

“I think everybody is writing me off after one loss, and f*ck them. The casual fan base is trying to, but my hard-core fans are too much. They know too much. My value is way too much.”

Everyone might not be writing Ferguson off, but Nurmagomedov appears to be. Last week the lightweight champion said he believes Ferguson’s time at the top of the sport to be over and that he doubts they’ll ever fight. Khabib also specifically noted that the damage Ferguson took in the Gaethje fight and over the course of his career will irrevocably change him. Ferguson agrees, but says it will be for the better.

“I learned a lot about myself in that fight,” Ferguson said. “I learned I’m not going to put myself in that position again, to take damage like that. I wanted to see how tough I was, and now I’ve found out. That scares people to do that, so I’ve learned how to work much better and more efficiently.”

At 36 years old though, and with Khabib’s retirement looming, Ferguson doesn’t have much time to make good on his promise. Perhaps the best chance he has to put himself right back into the contender discussion is a bout with a man who recently praised Ferguson’s blood-and-guts style of fighting: former Bellator lightweight champion Michael Chandler.

Chandler is currently on Fight Island to serve as the backup for the lightweight main event, but, assuming his services aren’t necessary this weekend, rumor has it that the UFC is targeting a fight between Chandler and Ferguson for later this year. And while Ferguson isn’t crazy about taking on a UFC debutant for his next fight, especially one who seems to have such favor with the UFC, he says if that’s what Dana White wants, he will oblige him.

“Michael Chandler hasn’t earned his way to the top,” Ferguson said. “But if that’s who Dana White wants me to fight, you know me: I put my boots on, and I go to work. When it came to COVID, I made weight, and I went to work. There was a point, 72 hours, it was myself, Dana, Sean Shelby and my wife, just trying to make that sh*t happen. If I hadn’t taken that fight, how many people would not have gotten paid?

“Do I want to fight? Yes. I want to fight in December. I’m f*cking training. Let’s go. But I don’t think somebody who doesn’t even belong here should be paid more than me. That’s what I’m saying.”

Ferguson has not fought since his loss to Justin Gaethje at UFC 249. His current record stands at 25-4.

Screwed. Justin Gaethje plans to ‘cause damage,’ stay off the fence against Khabib Nurmagomedov: ‘If I don’t, then I’m screwed’.

155. Dana White says Conor McGregor vs. Dustin Poirier has to happen at lightweight: ‘That fight means nothing at 170’.

Secrets. Trevor Wittman: Justin Gaethje has been able to keep his ‘most important weapon hidden’ ahead of UFC 254.

Huge. Dana White says UFC 254 is ‘trending to be the biggest fight we’ve ever had’.

Heavy Hands. Breaking down the big fights at UFC 254.

Can you tell just how badly it bothers Conor that Khabib owns him?

Look out! It’s the Gucci Mink Pimp on his Lamborghini Yacht!

The knee into the eye socket was illegal yes, from this position. A beauty tho. Never before seen shot. Like many of my shots.
I use the mount defence leg as a spring board, loading the knee below it. Release and straight to the eye socket. Smashed it in! @joerogan. Hey Dana pic.twitter.com/qZAcbbuIHS

This strike should not be illegal. Should actually be enshrined! Look at him cower his head after it and keep it tucked. Kept honest! Guy is latched onto my arm not letting go. Everything bar biting and gouging should be permitted here. Are we fighting or what are we doing here?

@JohnMcCarthyMMA what do you think Big John? Should this strike be legalized?
Your pal,
Mr. tasty shots

Praying for you brother @USMAN84kg and your country Nigeria! Above all else we are friends and brothers. We will have our day competing together hopefully sooner rather than later. I’m always in your corner, just want my day to shine.

You keep doing you, my friend. I always enjoy your fights.

There Is No Need To Capitalize The First Letter In Every Word Though… It looks really weird, and must take you ages to type stuff. #CapitalizeHashtagsOnly

I Do It On Purpose So A Grammer Nazi’ Like Yo’self Can Recognize & # Hashtag # Hashtag -Champ Shit Only™️ Kid- pic.twitter.com/j2fRsXpFhq

Eyes on the prize. Keeping on the grind no matter what. #UNCROWNEDCHAMP pic.twitter.com/zAPSXQ9Scg

Fight island 2!
3 weeks, no problem. We stay ready all year round. A huge thankyou to the ufc and the W hotel here in Abu Dhabi for treating us like royalty. I have the best job in the world and Saturday night I’m bringing home that Win. pic.twitter.com/CBw86aUOhQ

What’s up @bruceleeroyglow
I heard you had a game plan to take me down and submit me. You wanna try it? @ufc @danawhite @seanshelby @AliAbdelaziz00

Thanks for reading and see y’all tomorrow!