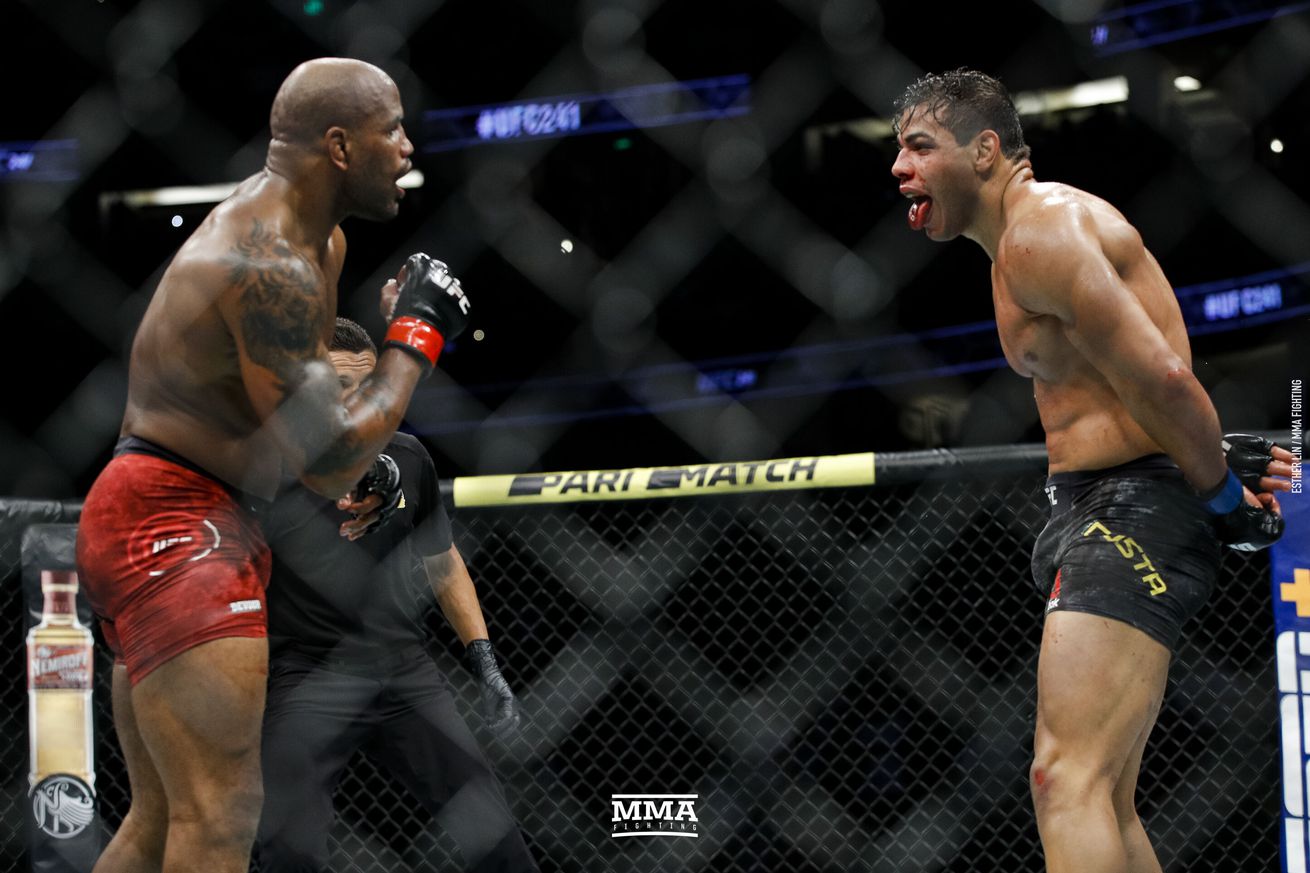 The main event of UFC 253 this Saturday has all the makings of a classic. You’ve got a dynamic champion in Israel Adesanya, a fearsome challenger in Paulo Costa, plenty of bad blood, and a pair of unblemished records on the line.

But just how spotless is Costa’s zero? To earn his shot at Adesanya, Costa had to get through arguably the most feared middleweight of the past few years, Yoel Romero. They met in a three-round thriller at UFC 241 on Aug. 17, 2019, with Costa picking up the win with a trio of 29-28 scores.

The fight was unquestionably close, but more than a few of their peers felt that Romero should have emerged the victor.

Definitely a good fight, I don’t see how that was a unanimous decision Costa

What a fight!!! Borrachinha fought like a warrior but Yoel got this one.

Even better, Romero is the lone shared opponent between Costa and Adesanya, and Costa has been quick to remind people that his win over Romero was much more impressive than the five-round snoozefest that occurred when Adesanya and Romero shared the octagon.

But did he really fare that much better or was this another hard-luck result for Romero? Let’s review.

One thing is for sure, Costa vs. Adesanya will have to be pretty damn incredible to match the excitement of Costa vs. Romero. These two came out throwing. In the first minute alone it felt like either man could have been knocked out and sure enough, Costa connected with a short left hook that visibly rocked Romero. Not to be outdone, Romero recovered and blasted Costa square on the jaw with a right hand that sent Costa tumbling.

Spoiler for anyone who hasn’t watched this fight before: It rules.

After a wild scramble, the action finally slowed down, relatively speaking. Costa was the aggressor, while Romero used cagey movement to slip and counter as Costa fired haymakers. A jumping knee by Romero led to him chasing Costa across the cage, only for Costa to crack him with a knee below the belt. Pause.

The fight restarted and Costa punished Romero for a sloppy takedown with some hard punches as he sprawled. Undeterred, Romero came up swinging. Costa battered Romero with body punches against the fence, but had to back up as Romero continued to swing big. On the defensive—if there was such a thing in this fight—Romero landed a counter left that caught Costa off-balance. They exchanged to the round buzzer and at that point it seemed impossible that it would go another 10 minutes.

Costa moved forward with a recklessness rarely seen in someone standing across from Romero. He was beating Romero to the punch consistently at the start of round two. Romero stuck out his tongue in the middle of an exchange because he’s a mad man, then he started tagging Costa with his jab. The commentary was highly complimentary of Costa’s durability, but it looked like he was getting hit a lot. Still, he emphasized body work throughout the fight and it had to be paying dividends.

Somehow, we made it to the third. Costa wanted to keep up the pressure, but Romero made him pay with a series of uppercuts. Romero’s body language was so loose at times, it’s unclear if he was at all tired or if he was just lulling Costa into a false sense of security to set him up for one of his trademark third-round detonations. An eye poke by Romero gave both guys a much-needed breather.

Costa still had success going to the body, but Romero was headhunting and connecting. Romero landed a few good punches against the cage then backed off and beckoned Costa to return to the center. They both put their hands behind their backs and taunted each other. Romero couldn’t quite land a kill shot but as usual, the final round was a good one for him.

When the verdict was read out in Costa’s favor, a scattering of boos could definitely be heard.

Judges Michael Bell, Guilherme Bravo, and Ron McCarthy all scored the fight 29-28, giving rounds one and two to Costa and round three to Romero.

Romero won the total strike count 125-118 (total and significant strikes were identical) and it wasn’t all because of his late work. According to the numbers, he out-struck Costa 40-37 in round two and 53-44 in round three.

Where things get interesting is when you examine where the fighters did their damage. Romero consistently landed punches to Costa’s head to the tune of a 96-67 advantage in that region, but Costa was just as dominant going to the body, winning that contest by a score of 46-11. Head shots are usually weighed heavily scoring fights, so it’s a bit strange that Romero wasn’t given more credit by the judges here.

Romero scored the lone takedown of the fight in round two, but it was actually Costa who was credited with the only ground strikes, going 3-of-6 in round one.

Both fighters were credited with a knockdown in the opening round.

The media scorers listed on MMA Decisions were evenly split, with 11 giving it Costa and 11 to Romero. Only one person deviated from a 29-28 score and that’s Yoel Romero Fan No. 1, MMA Fighting’s own Jed Meshew who had it 30-27 for the hulking Cuban.

On MMA Decisions, the people were mostly okay with Costa winning as 29-28 led viewer voting at 48.1 percent. Coming in at a close second was 29-28 Romero at 40.4 percent, with a smattering of votes going to the remaining outcomes.

Unsurprisingly, the second round was the closest, with 59.4 percent scoring it for Costa.

The same was true with scoring on the Verdict MMA app as Costa won round two by just eight points.

Yoel Romero vs. Paulo Costa was one of the closest fights ever hosted on Verdict.

The Verdict MMA scoring system takes the cumulative total of every submitted fan score (filtering out aberrant scores like random 10-7s if they comprise less than one percent of the total) in every round and divides by the amount of submitted scores to determine the winner of each round and also in totality.

Romero’s strong finish actually helped him win the final score by a narrow margin of 26 points. He won round three by 74 points, while Costa took rounds one and two by a combined 45 points. The Verdict score definitely doesn’t reflect a robbery even if users thought that Romero edged it out overall.

MMA Fighting did not run a poll, but you can check out some instant social media reactions in the replies below:

Paulo Costa defeats Yoel Romero via decision. How did you score the fight? Did you agree with the call? #UFC241 pic.twitter.com/GQ68XIY1SR

There’s not much point to dispute when it comes to round one and three. Yes, both scored knockdowns in round one, but it was Costa who pushed the pace and upon a second viewing it definitely looked like he was closer to finishing the fight. And round three was a clear Romero round.

So it comes down to the second. From the beginning of that round onward, you can see the fight gradually turning in Romero’s favor. The question is did it turn fast enough? Romero was absolutely putting hands on Costa especially in the last two minutes, but Costa was always right there with him and he was brutalizing Romero’s mid-section.

I scored this for Costa when I first watched this, but was probably won over by his non-stop aggression. On the rewatch, I found myself favoring the damage that Romero was doing to Costa’s face.

With the benefit of replay, rounds two and three to Romero on my card.

This is a tough one. On the one hand, it feels like this is a classic coin flip fight where it really depends on how you compared the head and body work. Were Romero’s stinging head strikes worth more than Costa’s rib-roasters? Difficult to tell from the outside looking in. However, it should be noted that Romero may have done himself a disservice in the playful way that he wobbled and shook in reaction to Costa’s punches. That’s the sort of thing that matters in the eyes of the judges.

Under PRIDE rules, you would have to score it for Romero as he put it on Costa badly in the third; under the unified rules, Costa’s work in the first half of the fight was good enough to win it.

While I’m happy to be the tie-breaking vote among the media and hand Romero the retrospective W, that doesn’t change the fact that this one was too close to call (and so much fun to watch).