Ricardo Lamas has plenty to reflect on after retiring from MMA competition.

The former UFC featherweight title challenger laid down his gloves last month following a dramatic win at UFC on ESPN+ 33 in a wild, back-and-forth brawl with Bill Algeo, which won ‘Fight of the Night’ awards. Lamas (20-8 MMA, 11-6 UFC) retired after having competed professionally for more than a decade.

What won’t be listed in the record books is a noteworthy intangible: Lamas represented Hispanics in the sport of mixed martial arts and had a considerable role in helping MMA grow in Latin America.

“There are many moments in my career that I’m very proud of, and one of them, is the first event the UFC held in Mexico,” Lamas said on Monday’s episode of Hablemos MMA.

“I helped the UFC promote the sport all over Latin America,” he continued. “I flew to Mexico several times to promote the event and I was part of that event in Mexico City and that was a moment I will always remember. The first time UFC went to Mexico and I felt like I helped open the doors for many Mexicans and Latinos to get into the UFC.”

The UFC broke ground in Mexico with UFC 180 back in November 2014. Lamas defeated in Bermudez in the pay-per-view main card. He did several media tours in Mexico to promote the event and the sport in the lead up to the fight. The UFC taken six trips to Mexico and Lamas fought in three of those events.

Ricardo Lamas officially retires: How a rosary and his brother’s memory helped the UFC standout make the call

“The Bully” also took part in the UFC’s first trip to Argentina. He served as the co-main event of the card, where he stopped a durable Darren Elkins in the third round of their contest. That card in Argentina was also the second event held in a Hispanic country in South America – the UFC hosted the first in Chile earlier that year in 2018.

MMA has grown in Latin America and Lamas has been able to witness it first hand.

“I’m very happy about that (MMA’s growth in Latin America),” Lamas said. “The sport is still very young and people need to keep that in mind. MMA started in the ’90s, and out of all the major sports in the world, it’s the youngest sport. It’s growing a lot,  it’s blowing up everywhere, and now you can watch it in every country in Latin America. It’s incredible.”

Lamas feels at peace to have walked away from the sport and is satisfied with what he was able to accomplish.

“I have peace with my decision to retire,” Lamas said. “Like I said before, I did a lot in my career and I’m proud of many things and I knew that it was time. It’s a decision that’s hard to explain, but I feel at peace and I’m happy with the decision.

“Bill Algeo gave me a good fight and he brought the dog out of me, the savage in me. I’m satisfied with that fight and I want people to remember me that way – a fighter who always gave it his all and always fought with all his heart. I leave my soul in that cage and that’s what happened in that fight. I’m happy about that.”

Lamas plans to stick around the sport, as he owns a UFC Gym in Chicago. He hopes to help groom the next generation of athletes. The seasoned veteran would also like to continue some of the work he’s done with the UFC.

“There are no words to describe it (the Latin American support), I just want to thanks for all the support for so many years,” Lamas said. “It was an honor to represent all the Latinos in the UFC and I hope the UFC gives me other opportunities to go to Latin America to promote the UFC and the sport.”

Photos: Ricardo Lamas through the years 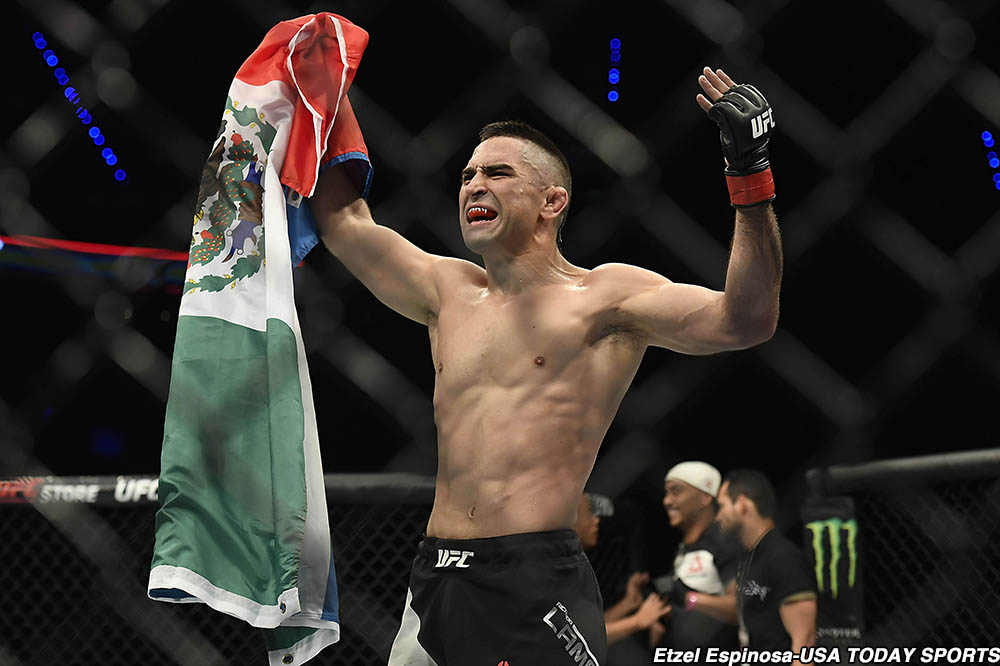