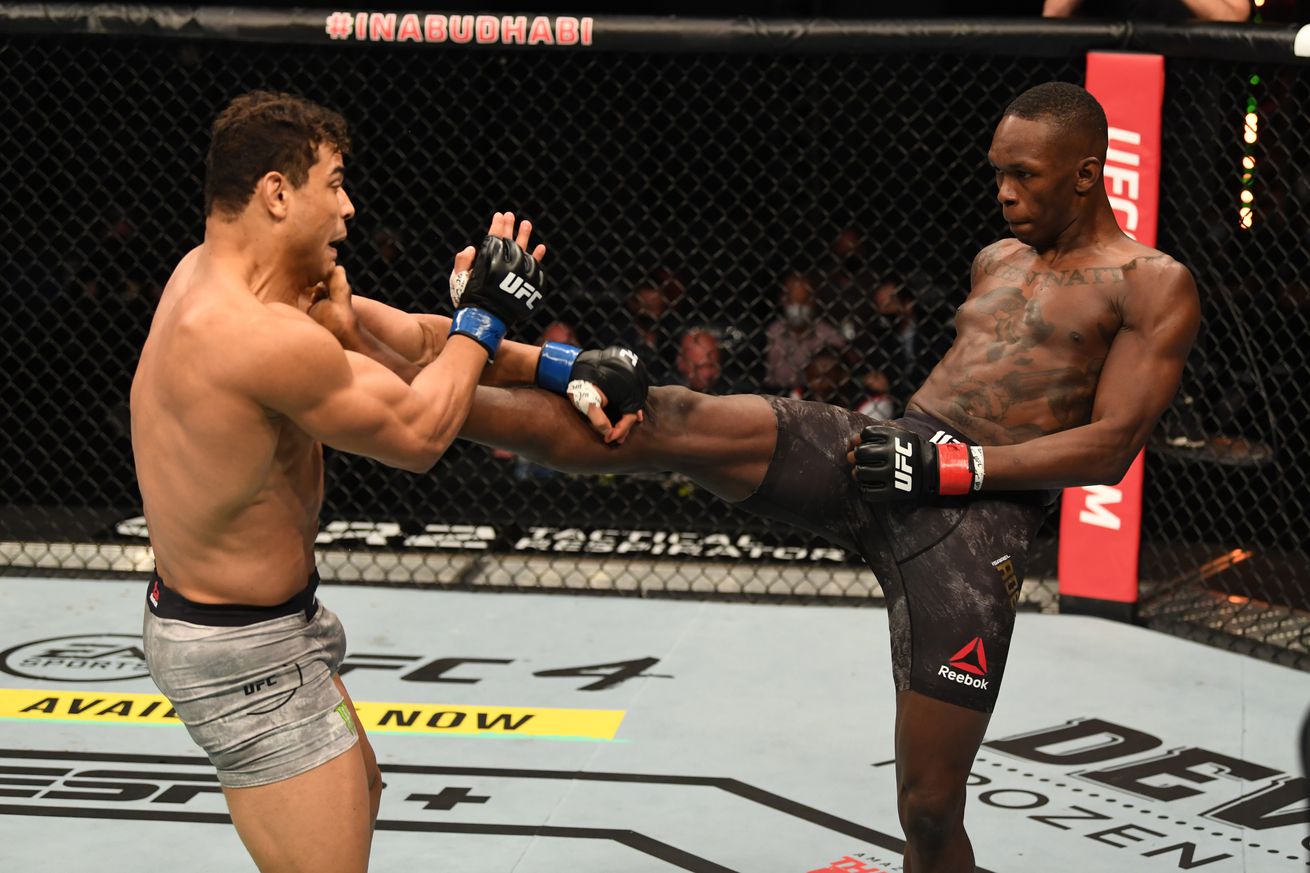 The highly anticipated – and highly significant – middleweight title fight between champ Israel Adesanya and Paulo Costa was certainly exciting – but not anywhere near as competitive as expected.

Adesanya delivered a master class in striking performance, dismantling Costa with kicks before turning up the tempo in the second round and landing a punch that floored the Brazilian and set up a second-round TKO.

In the co-headliner, Jan Blachowicz captured the light heavyweight title left vacant by Jon Jones with a dominant win over Dominick Reyes. One-time title challenger Reyes never got out of second gear and wound up getting caught by Blachowicz in the second round, leading to a TKO that delivered the title to the Polish vet. Immediately afterward, Blachowicz called out Jones, who’s expected to move up to heavyweight.

Damn that was pure perfection!!

A BEAUTIFUL striking display by @stylebender ! Made it look easy! #ufc253 #ufcfightisland

Wow! Not even close man! What a performance from Adesanya! This man will be champ for a LONG time, as long as Father Time allows it! #UFC253

A master class from the middleweight KING ?! #UFC253

The skinny clown can fight

I still want to see Izzy vs Bones

That was the best performance I have ever seen in a mixed martial arts fight. Holy moly. @stylebender

This is crazy to see Izzy just styling’ in the octagon right now! And on Paulo Costa?! Only 2 RDs but these were the RDs Costa needed to land big damage going into the later RDs #UFC253

At some point Paulo has to open up. Can’t win a fight like this

Costa done with the antics yet?

Those calf kicks are painful #UFC253

Maybe challenge Neil Armstrong in a race to the moon while you’re at it, “Mr. Yesterday’s News”

What’s up with Izzy right tit

Israel looks like he has got some swelling in his right tittie! #UFC253

I’m geeked out of my mind right now #UFC253 pic.twitter.com/m45InQUeFF

It’s about to go down. Bout to take some notes and steal some moves from the master Ninja @stylebender https://t.co/lG5AFeuvUO

Well fuck! Gotta pull the trigger!!! Nothing left to do but get back up. Congrats to Jan, hell of a performance. #UFC253 #justgettingstarted

#ANDNEW @JanBlachowicz Ladies and Gentlemen we love ya champ #UFC253

Congratulations @JanBlachowicz and his team.

Congrats Champ @JanBlachowicz would be an awesome fight with @JonnyBones

Congrats to new champ Blachowicz!! Sucks to see Reyes go out like that after a very controversial loss to Jones

Congrats @JanBlachowicz Now let me work on getting your or my wish fulfilled! #ufc253

That one will hurt when you take a shower tonight #UFC253

Crazy we made it to a second round in this fight!

Left kick to the body seems open all day

beautiful first round by Jan

My prediction, I just know that want to fight with the winner one day #UFC253

Next fight absolutely interesting for me! #ufc253

Yooooo this fight is insane ten seconds in! Wow! #UFC253

Everyone is so angry walking out tonight #UFC253

Man we still got 2 more fights that can go 25 minutes gonna be all fucking night man. #UFCFightIsland #ineedsomesleep

Damnnn these ladies killed it tonight!! S/O to Sijara for stepping up on short notice too after fighting a couple weeks ago!! Warrior #UFC253

Welp. Wish I could’ve kept it standing. Good point round for both.

Damn Tukhugov backpedelled the whole third round. I still have no idea who the judges are gonna pick.

This is amazing !! No cursing just knock each other out !!

Dawodu needs a finish. He lost 1 and 2 was close but finished on bottom, risking the judges decision will really be rolling the dice. @ufc #UFC253

that screaming walk down was cool as sh#t!!