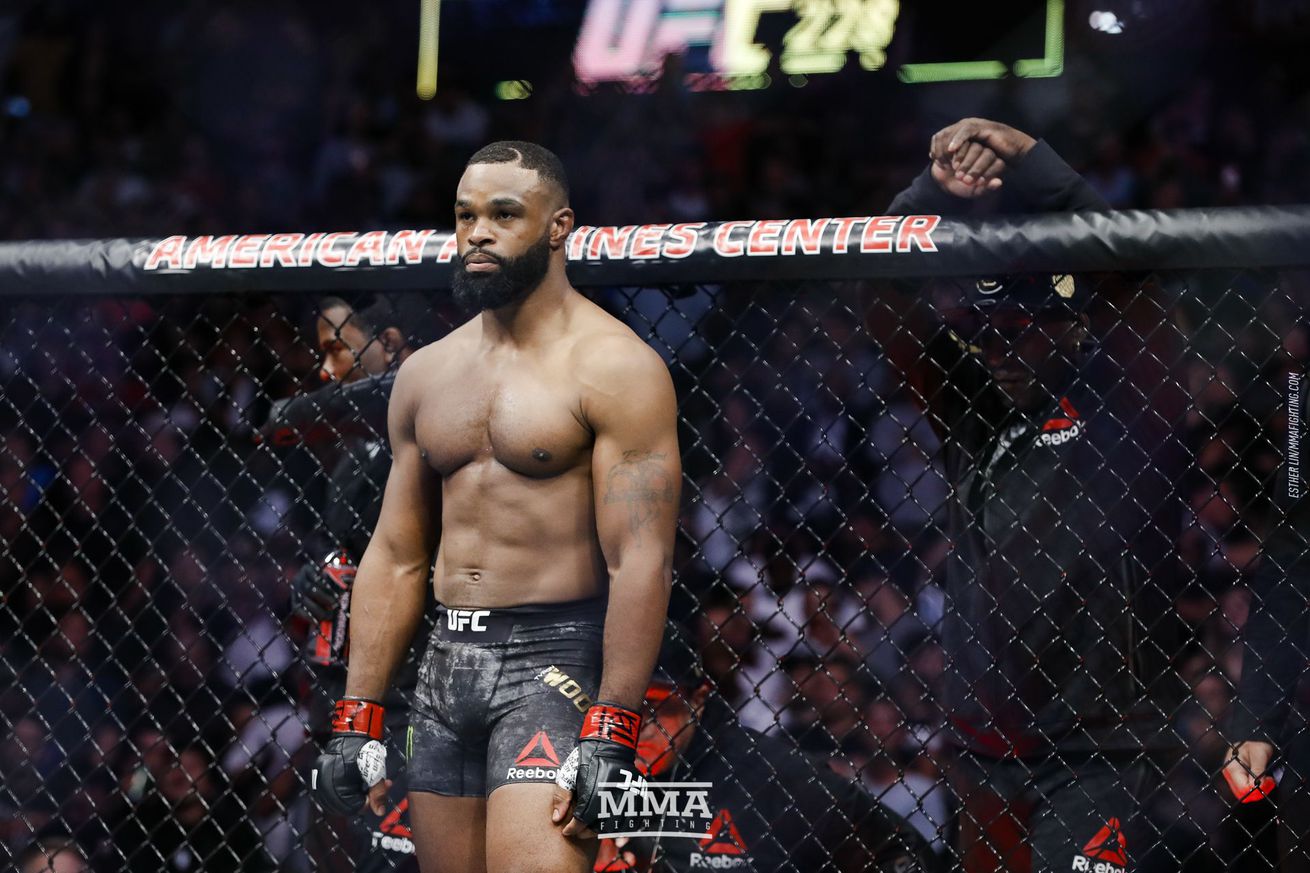 Even without a title on the line, the grudge match between Colby Covington and Tyron Woodley is the stuff that pay-per-view main events are made of.

Had this fight happened 18 months ago, that’s likely the position these two blood rivals would have found themselves in; instead, in the ESPN+ era of the UFC they headline a stacked UFC Vegas 11 card going down at the UFC APEX in Las Vegas this Saturday. That less prestigious positioning is emblematic of the bloom that has been taken off of what has long been considered a must-see matchup.

Neither man enters carrying a title, undisputed or otherwise. Both are coming off of losses, though Woodley’s recent efforts have been considerably more discouraging than Covington’s competitive clash with welterweight champion Kamaru Usman. And neither were given much of a chance this week to build on the years of animosity that has naturally developed between them, with Woodley simply repeating “Black Lives Matter” after Thursday’s press conference to address social unrest in the U.S. and Covington having to deliver his usual rhetoric to a group of reporters as opposed to his opponent’s face.

Surely, there’s something to be said about the contender and career implications for both men, but at this point we’re all just looking forward to seeing them get 25 minutes to back up their talk and maybe, just maybe—though I wouldn’t bet on it—settle their differences once and for all.

In other main card action, welterweights Donald Cerrone and Niko Price meet in a co-main event that has already been anointed as the “Fight of the Night,” hot prospect Khamzat Chimaev faces middleweight veteran Gerald Meerschaert, Johnny Walker looks to break the first losing streak of his career when he fights fellow light heavyweight blue-chipper Ryan Spann, Brazilian jiu-jitsu ace Mackenzie Dern fights Randa Markos in a strawweight bout, and middleweights Kevin Holland and Darren Stewart look to stay in the winner’s circle.

Where: UFC APEX in Las Vegas

When: Saturday, Sept. 19. The eight-fight preliminary card begins at 5 p.m. ET on ESPN+, with the six-fight main card starting at 8 p.m. also on ESPN+.

As much as I’d love for this to be a competitive five-round main event, a fitting culmination to one of the most organic feuds in recent memory, I strongly believe that Colby Covington is tailor-made to deal with the current version of “The Chosen One.” He’s one of the best fighters in the welterweight division at using pressure and volume, two of Woodley’s weaknesses even before his recent troubles. In a battle of tactics, Woodley excels; when his opponents dictate the pace and tone of the fight, he falters.

If Woodley can’t get fired up for this fight with Covington, there’s no man who left who will be able to drag a vintage performance out of him. Everything about Covington is designed to motivate Woodley. I confess to being terrible when it comes to factoring in intangibles (by their very nature, impossible to measure), so I can’t assume that Woodley will magically return to vintage form on Saturday just because he’s seeing red. It’s a reasonable narrative though if you’re predicting a Woodley victory.

I, however, am not. Covington can match Woodley’s wrestling and has an extra gear in the standup that Woodley hasn’t shown for some time. Even if Woodley gets off to a promising start, I see Covington outlasting him and winning a decision.

Don’t count out “Cowboy” just yet.

Yes, four straight losses is a bad look for any fighter, much less one who turned 37 earlier this year and is about 10 years older when factoring in combat sports mileage. And putting Donald Cerrone in the cage with one of the hardest hitters at 170 pounds doesn’t sound like a salve for his worries.

If it comes down to skill though, Cerrone has the advantage over Niko Price when it comes to striking diversity, all-around game, and experience. Both men have been in wars, but Price has yet to be tested against the very best that the UFC has to offer like Cerrone has. Look at any of Cerrone’s losses from the past three years. It’s a list of former champions and top contenders from two divisions.

Price is a talented fighter with great energy and that’s going to take him a long way in his career. Who knows, he may find himself playing the “elder statesman” role like Cerrone someday. Here and now, Cerrone is the better fighter and he’s going to snap his skid at Price’s expense.

Here it is, the first major test of Khamzat Chimaev’s career.

With respect to John Phillips and Rhys McKee, two fighters who were ill-equipped to deal with Chimaev’s elite wrestling, it falls upon Gerald Meerschaert to be a litmus test for The Crown Prince of Fight Island. “GM3” has a highly respected ground game and if Chimaev doesn’t treat it as such, he’ll become Meerschaert’s 24th tap-out victim.

What can Chimaev do to avoid that fate? Wrestle his ass off like he’s been doing. Say what you want about Phillips and McKee being overmatched, but Chimaev did what you’re supposed to do and he ran straight through them like they were barely there. The Khabib Nurmagomedov comparisons are legitimate. It takes a special kind of wrestler to not just have an explosive shot, but to be able to go to your second, third, and fourth options in pursuit of a takedown. Chimaev goes through those progressions like a star quarterback and when he gets the fight to the ground, he maintains his aggressiveness.

That said, I do think he’ll have to focus more on control should he tussle with Meerschaert on the mat because as mentioned, Meerschaert can finish in a variety of ways down there. While he does have size, he lacks the burst that Chimaev has shown, which leads one to believe that if Chimaev can keep up the pace for three rounds it’s going to be difficult for Meerschaert to get up or attack from his back.

This fight is going to reveal a lot about Chimaev, both in terms of how gifted he is and also how far he has to go before he’s truly ready for elite competition.

Count me among those who still believe in the Johnny Walker hype.

His dynamic striking is what sent him soaring up the light heavyweight ranks and it’s what’s going to bring him the victory against Ryan Spann. “Superman” has dangerous hands, but he also has defensive deficiencies that can’t be ignored. If he can get caught clean by veterans like Sam Alvey and Antonio Rogerio Nogueira, what’s going to happen when he has the speedy Walker rifling punches and hurling flying knees at him?

In fairness, Walker also has defensive question marks so this matchup will likely be decided by who makes a mistake first. If you’re a believer that Walker has learned and matured from his first two UFC losses, then one can only expect him to go upward from there. This should be an entertaining battle that ends with Walker get back on the positive side of the highlight reel.

For those of you not familiar with what The Randa Markos Sequence is, the veteran strawweight has somehow gone over six and a half years without recording consecutive wins or losses. Given the volatile nature of MMA, that seems like a statistical impossibility. And yet it is so.

She’s coming off of a loss to Amanda Ribas and I expect Mackenzie Dern to beat her as well to break Markos’ bizarre pattern. Dern has shown some raw ability in her standup, and if she’s honing that part of her game with Jason Parillo, then you can expect there to be substantial improvement from when we first saw her. Add in her top shelf jiu-jitsu and this is a tough draw for Markos.

Expect the Canadian grinder to make life difficult for Dern early on. She’s been in this game too long to be intimidated by anyone, even a fighter with Dern’s grappling credentials. When the time comes to shift into another gear though, I think it’s Dern who asserts herself on the ground and becomes just the second fighter to submit Markos.

Do you lean towards the steady Darren Stewart or the unpredictable Kevin Holland? At his best, Holland is a ton of fun to watch, and here’s why I think he takes out Stewart.

Holland is just starting to hit his peak and you can see in his last couple of fights that his talent has caught up with his skills. Though he’s still a fresh face in the UFC, Holland has fought over 20 times with his best days still ahead of him. He’s tightened up his striking and appears to be making better decisions as far as knowing when to mix his standup skills with his grappling.

That blending of techniques is scary. Fortunately for Stewart, he has his own tools to deal with the threat of Holland. He’s great at fighting from range and also knows how to throw in the occasional takedown to disrupt his opponent’s rhythm. What’s going to give him headaches is the extraordinary reach of Holland, an advantage that Holland brings into most of his fights.

If Stewart can’t change things up and figure out how to get inside on Holland, he’s going to get picked apart. As it is, I predict Holland will catch him with something coming in and submit him.