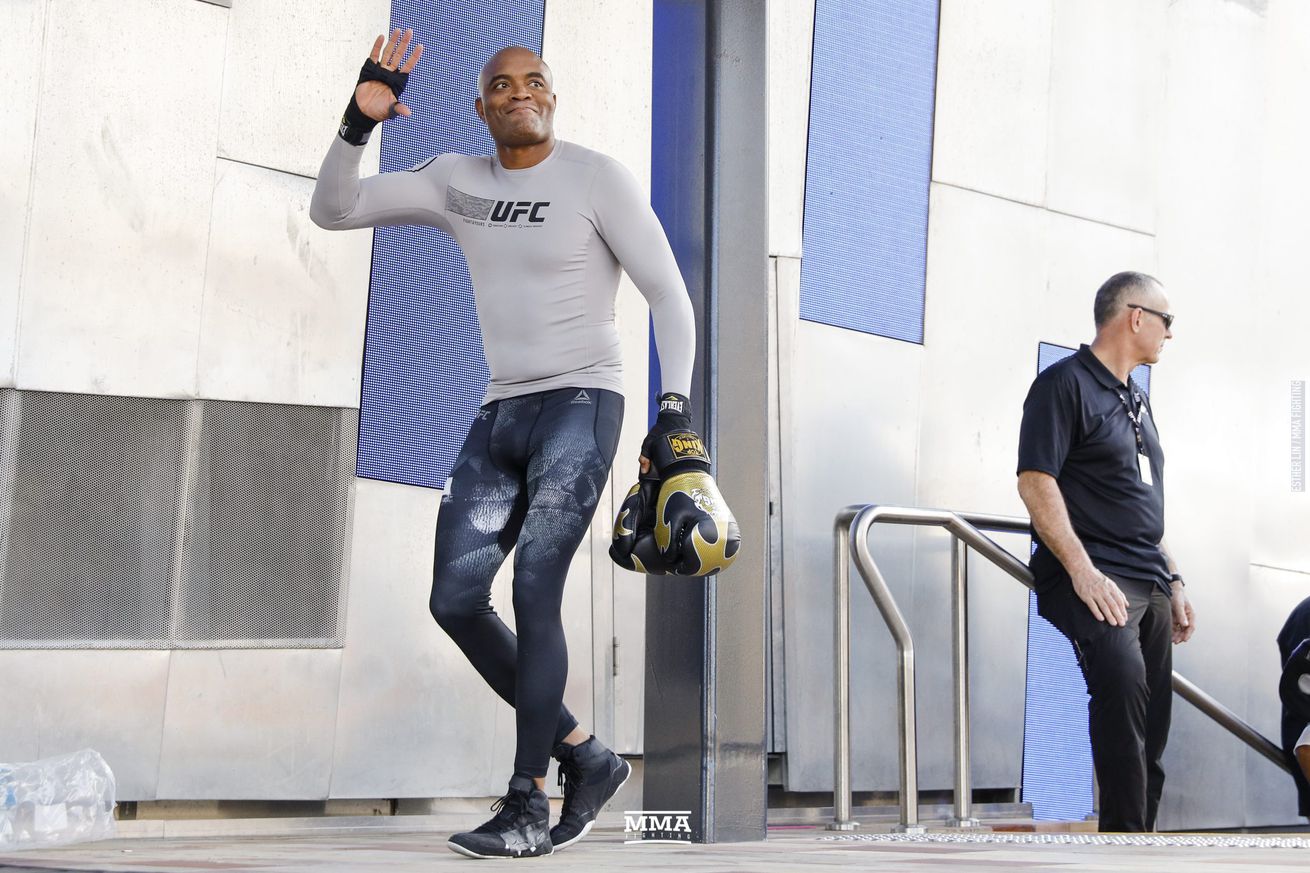 This might not be the last time we see Anderson Silva fight, but we should savor the moment all the same.

It’s an important distinction to make considering that Saturday’s UFC Vegas 12 middleweight main event has been marketed as Silva’s final appearance – at least for the UFC – despite the fact that he’s left the door open for a return in interviews and still has fights left on his current contract. Regardless, the UFC has played along with the narrative, as have many of us in the media who are happy to take this opportunity to wax poetic on Silva’s greatness.

He has a fitting foe to send him off in Uriah Hall, the former Ultimate Fighter standout who at the peak of his powers drew comparisons to Silva for his dynamic striking style. Seven years into his UFC run, Hall has yet to live up to those lofty expectations, but now he gets the chance to notch a win over one of the greatest fighters to ever live and in doing so perhaps insert himself back into the title picture.

The co-main event has contenders’ implications as well, with the undefeated Bryce Mitchell looking to go 5-0 inside the octagon and advance in his quest to become the first fighter from Arkansas to challenge for UFC gold. He has a tough task ahead of him as he meets the always game Andre Fili, a veteran of 15 UFC fights.

Where: UFC APEX in Las Vegas

When: Saturday, Oct. 31. The six-fight preliminary card begins at 4 p.m. ET on ESPN+, with the five-fight main card starting at 7 p.m. also on ESPN+.

You have no idea how badly I want to pick Anderson Silva here.

It’s not just a matter of fandom or nostalgia—though I imagine even the most objective analyst would have a hard time not rooting for one more vintage performance from “The Spider”—it’s the fact that Silva hasn’t really looked that awful in any of his recent outings even as he’s struggled to find a win over the past eight years. Admittedly, the first-round loss to Jared Cannonier may have been a legitimate indicator that Silva’s time is up, but before that he went three rounds with the current champ Israel Adesanya, edged out a controversial win against Derek Brunson, and also lasted three rounds against Daniel Cormier in a light heavyweight bout that he had no interest being in.

Even his loss to Michael Bisping occurred in a fight where it appeared that he knocked Bisping out in the third round! Yes, he’s 45 years old, but are we sure we’re not counting out Silva too soon? At times, it feels like he’d be able to get over the hump if he could just pull the trigger like he used to.

Yet it’s that loss of a half-step (or more) that makes it illogical to go against Uriah Hall here. Even if we still think Silva is technically superior in both the standup and grappling, Hall has surely closed the gap between them over the years and when you factor in Silva’s drop-off in athleticism, the equation tilts in Hall’s favor. Hall has shown a lot of maturity in his past two outings and has always had the reputation of a fighter who, when locked in, can compete with anyone at 185 pounds. He would have been an intriguing matchup for a prime Silva. Against current-day Silva, it’s his fight to lose.

I confess, I’m terrible when it comes to gauging how close a prospect is to making the leap, so keep that in mind when I say that Bryce Mitchell’s unbeaten run ends Saturday against Andre Fili.

Mitchell’s high-octane grappling and endless motor make him a thrill to watch, and if he sets the pace early, it’s difficult for any opponent to climb back from the deficit. That shouldn’t be an issue for Fili, a fast fighter with solid takedown defense. He’ll have to weather an early storm as I fully expect Mitchell to shoot in at the first opportunity to take the fight to the mat.

In this case, defense and experience should win the day, both of which are in Fili’s favor. Then again, I could be completely wrong and Mitchell’s grappling is simply too much for “Touchy.” Add in the fact that he’s probably +5 in all attributes thanks to his Magical Shorts of Camouflage, and maybe Mitchell will show that he’s the real deal at 145 pounds.

When you’re still working your way through the lower and middle ranks of the heavyweight division, athleticism can take you a long way. That’s the advantage Greg Hardy has had in the early stages of his fighting career and it’s one he’ll have against Maurice Greene as well.

I don’t think it will be enough this time around though. While the UFC has done an excellent job of matchmaking Hardy, Greene is the stiff test needed to bring him back to reality. He can be awkward at times, but “The Crochet Boss” is well-versed in kickboxing, and on the ground, he’ll be a handful for Hardy if he can take the fight there. That’s where the quickest route to victory lies and I see Greene utilizing a smart game plan to take Hardy down and submit him before the third.

Firstly, congrats to Charlie Ontiveros for even making it to fight night after a bizarre situation this past July in which he was supposed to make his UFC debut on short notice as a replacement for Eric Spicely, only to find out that he wasn’t medically cleared before he even had a chance to step on the scale.

Welcoming him to the octagon is Kevin Holland, making his mandatory monthly appearance for the UFC apparently. Holland has already picked up wins in August and September, so why not make it three straight in less than 90 days?

Holland is understandably a heavy favorite here, but keep in mind that he’s rolling the dice every time he jumps into one of these fights against a lesser known opponent. Ontiveros has good striking fundamentals and while he can’t quite match Holland’s reach, he has the size to battle Holland in the clinch. If he can mix things up early, he can threaten an upset.

What’s made Holland such a joy—and occasionally frustating—to watch is how adaptable he is. He likes to get a look at his opponent’s best weapons and challenge them there, but he’s also getting better at taking the path of least resistance. In the Joaquin Buckley fight, he showed that he won’t be put off by a newcomer going for broke, so he shouldn’t be caught off-guard by Ontiveros.

Another thing working against Ontiveros is that he’s a glass cannon, with all six of his losses coming by way of knockout. Holland will add to that number.

Green has defensive tools that are going to make life difficult for the aggressive Moises, a classic Brazilian jiu-jitsu ace with raw power. It’s hard for me to picture anything but a scenario where Green avoids Moises’ takedown attempts, slips his some wild punches, and pieces Moises up for three rounds. There’s a formula to a Green win at this point and it’s on Moises to disrupt it.

One element in Moises’ favor is that he can be incredibly creative in how he sets up submissions. If Green is careless for even a second and Moises gets a hold of him, he’s done. Green has shown good submission defense throughout his career, with no tap-outs on his ledger in almost 11 years.

It’s not a sexy pick, but Green gets the job done here for his fourth straight W.