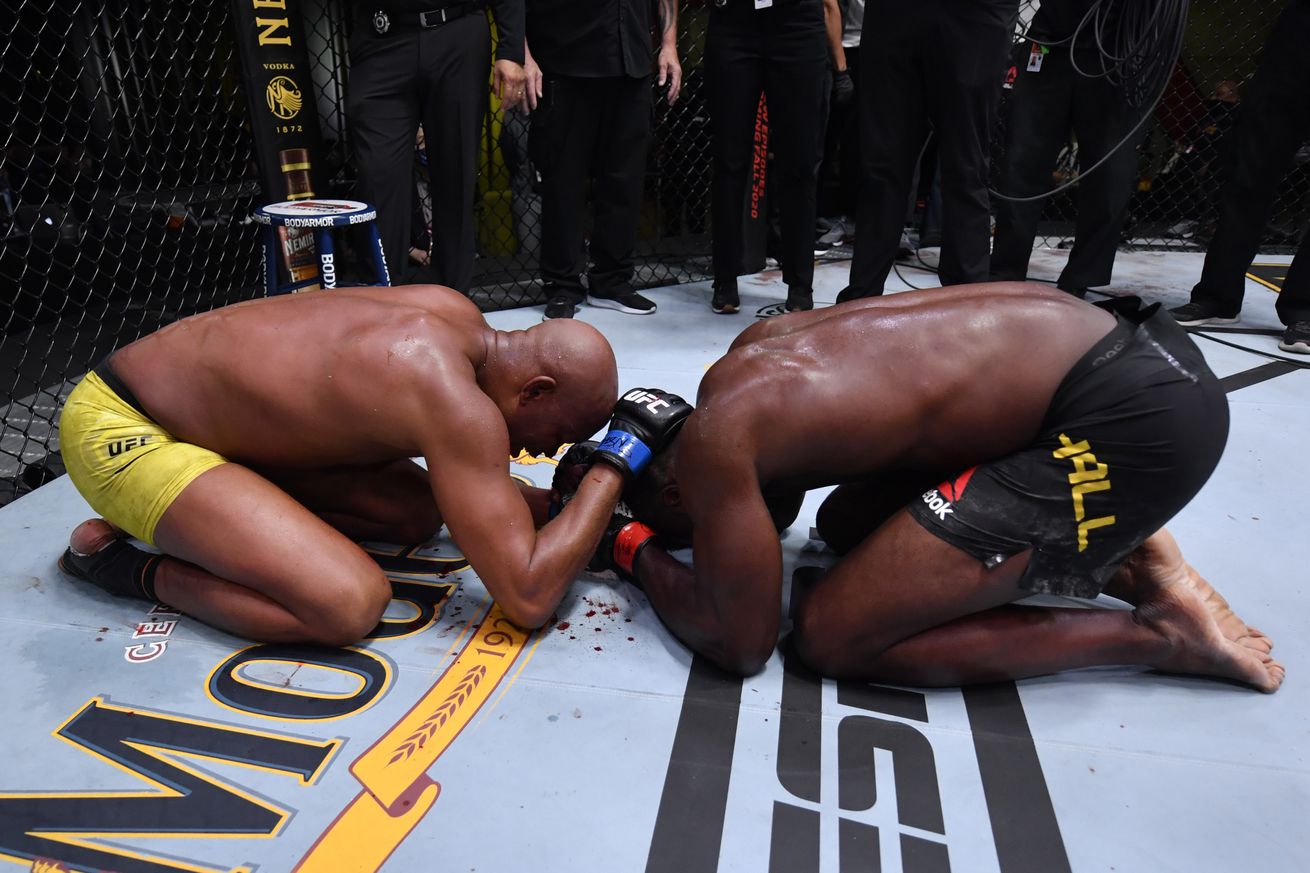 If UFC Vegas 12 was truly the last time we saw Anderson Silva perform, he couldn’t have asked for a much better scene partner.

It was Uriah Hall who got the call and he was victorious in what has been billed as Silva’s last UFC fight, putting “The Spider” away with strikes in the fourth round of Saturday’s middleweight main event at UFC APEX in Las Vegas. Afterwards, Hall broke down in tears as he and Silva embraced even as Silva was in the middle of having his cuts tended to.

Hall, 36, spoke about the interaction at the evening’s post-fight presser, doing his best to explain the tumult of emotions that were running through him after competing against one of his idols.

“After the fight we shared a moment,” Hall said. “It’s a very honorable moment for a lot of martial artists that are out there would see and understand. I’d say probably two-thirds of the people who are watching this will never understand that and that’s fine, but the fact that a guy like that took me from a younger youth saying, ‘Oh I can be creative like that. I can potentially train like that’ to stepping in front of them and competing against them and beating them, it was an incredible moment.

“I fought that moment for a while, I mean I fought the emotions leading up to this fight, so right then and there I just had to let it all go.”

Silva, 45, has left the door open for his fighting career to continue. Throughout fight week and even in his post-fight televised interview, he mentioned how he plans to talk to his team and family before making a definitive statement about retirement.

UFC President Dana White told the media that he won’t have Silva step into the octagon again, but even if this is the end of this chapter for Silva, Hall isn’t taking pride in shutting the cage door on him.

Asked how his moment with Silva would compare to winning a UFC title, Hall said they’d be right next to each other in terms of significance. However, even with current middleweight champion Israel Adesanya in the building, Hall’s duel with Silva was his main focus.

Now on a three-fight win streak, Hall is on his best stretch of success in over five years. His chat with Silva though didn’t revolve around what it will take to be a champion (something Silva would know much about having successfully defended the UFC’s middleweight title 10 straight times), but rather how to maintain other aspects of his life.

“He was just telling me to train your mind,” Hall said. “Anderson is a little detached from this whole B.S., I get where he’s coming from. He keeps saying that it’s not about fighting, I get that. A lot of people don’t understand that. It’s about that moment, but it’s hard for right now where this sport is where you guys just capitalize on the title, you guys will never get that, so I see where he’s coming from where it’s about that moment you share and it is. I will never get that moment back. Those 12 minutes, whatever, I’ll never get that back. So he was talking more about that and I guess as you get older in the sport you’re more focused on that. It’s like, what’s more important now? Family, friends, loved one. So I get where he’s coming from. But at the same time he was still dangerous.

“He was pretty much just telling me, ‘You can be world champ.’ And ‘thank you,’ he was thanking me, I’m like, ‘What are you talking about, bro?’ He was just saying train your mind and to be a better version of yourself pretty much and I admire that. No one can ever take that away from me. I gave that so much leverage to say that was like my championship fight because I looked up to him so long and to share that moment in the octagon, which I guess is potentially his last, it was pretty cool.”

It was a surreal moment for Hall, one that he made sure to appreciate. He cried. He hugged Silva. He fell on his knees and Silva did the same, paying their respects to one another in “the Bushido way” as Hall put it.

And after everything Hall had gone through to get to this point, he wasn’t going to leave anything unexpressed.

“It was just all the emotions coming in and I’m like, ‘Dude, don’t do it. Don’t cry. Don’t be a b*tch. What are you doing? Hold that sh*t in,’” Hall said. “It was just everything rushing in. The entire year of training, literally training for a year, the pandemic, the ups, the downs, the living in the gym, the fights that fall out, losing motivation, finding motivating, losing weight, losing the mindset to get back in it. Everything right then and there just came out.”

Dreams do come true .. can’t begin to tell the emotions leading up to this fight. To grow up watching this man idolizing him mimicking him and having so much respect towards him. To separate the emotions of going up against my idol is truly a remarkable feeling. I will forever be grateful for the opportunity we shared in the octagon although it was not my best performance because It was the hardest thing I ever had to do . I’ll savor every moment thank you @spiderandersonsilva for not only being an inspiration to me and a lot of others but for how you carried yourself in and outside of the octagon you are a true legend no one can take that away