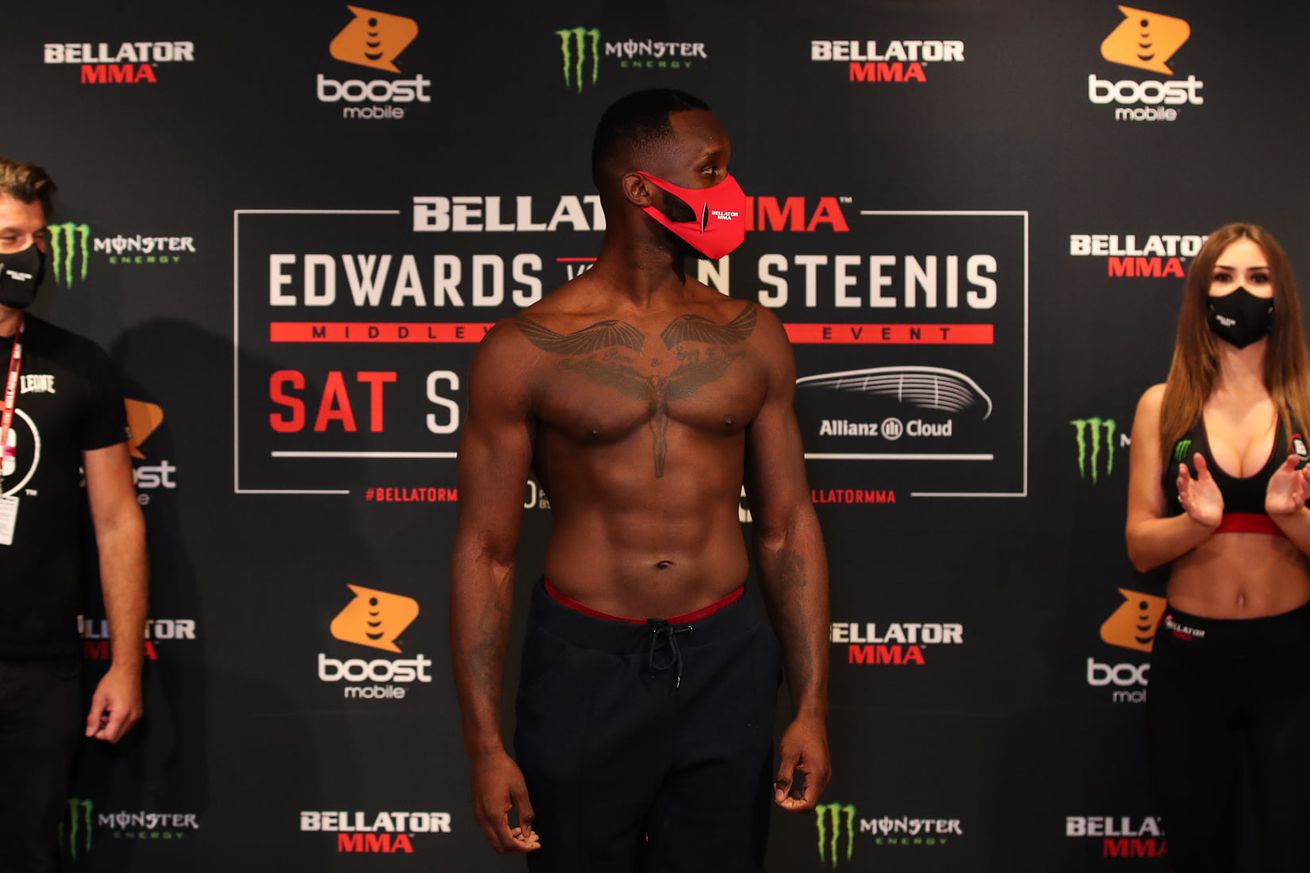 With the Bellator middleweight soon to be claimed, the timing is perfect for Fabian Edwards’ first Bellator headliner.

The undefeated Englishman fights Costello van Steenis in Saturday’s Bellator Milan main event, one month before welterweight champion Douglas Lima moves up to 185 pounds to take on veteran Gegard Mousasi for a vacant title. Should Edwards improve to 10-0 with an impressive showing against van Steenis, he’ll be at the front of the line to challenge the winner.

Given his flawless record in five Bellator outings, one might wonder if Edwards is at all bothered by Lima jumping the middleweight line. Edwards isn’t overly stressed about it and he expects Lima to return to his lighter weight class sooner rather than later anyway.

“It did and it didn’t because I understand the angle that Bellator’s coming out,” Edwards told MMA Fighting when asked if he had an issue with Lima stepping into the middleweight title picture. “So I couldn’t really knock them for what they was doing. For a lot of guys that’s been grinding away through the division, for a welterweight to jump up and fight for the title, obviously it ain’t fair but life ain’t fair.

“I don’t think he’ll stick around. I think he’s just coming in to have one or two fights and then dip it out back to his division.”

Should the title end up being vacated again due to Lima going back down to welterweight immediately, Edwards is fine with getting one of the slots in another vacant middleweight title booking.

But he welcomes a chance to knock off one of Bellator’s most highly-respected stars as well.

“I’d be fine with that,” Edwards said. “I’d love to challenge him, but he doesn’t want to stick around and fight all the bigger guys. Mousasi, he’s not a big guy. Even for a bigger weight division he walks around pretty light, he looks pretty slim.

Edwards, 27, could be on track to receive a title shot faster than his brother, UFC welterweight contender Leon Edwards. Despite the fact that Leon currently owns the second-longest win streak in the UFC at eight, he has yet to get a crack at that promotion’s championship due to being the odd man out as the stars of his division pursue other fights.

Though they avoid talking too much about matchmaking politics, Edwards agreed that he’s likely closer to a championship opportunity than his older brother.

“I feel that way,” Edwards said. “I shouldn’t, but I feel that way. Obviously, his situation over there with the UFC and the division being held up and everything like that. I feel like after this fight I’ll be one more fight away. So it all depends on how quick I have that one.”

The winner of Bellator Milan main event could reasonably be next to fight for the title, though an Edwards victory would make things easier for the matchmakers as there is little chance that van Steenis would fight his mentor Mousasi should “The Dreamcatcher” defeat Lima.

Edwards and van Steenis were initially booked to meet in London this past May before the coronavirus pandemic hit and while he expected the match to be rescheduled, he’s not assuming that it was to keep the story line of a potential fight with Mousasi alive.

“I don’t want to be one of these guys that stays in the sport and is just fighting random guys. I want to keep fighting the guys that Bellator put respect on and they’ve put a lot of respect on Costello, so I can’t wait to go out there on Saturday and show them.”

Given Mousasi’s sterling reputation, he could be the “one more fight” that Edwards needs to cement a title shot. Beyond that, it’s a name that Edwards knows would stand out on his resume, even with Mousasi possibly coming off of a loss.

“I still want to fight him,” Edwards said. “It’s always good to have a legend on your record, regardless. Win or lose, if he’s the next fight that’s a fight that I would take.”