Joshua Fabia is not Matt Serra’s “type of guy”.

In a recently-released episode of “Dana White: Lookin’ FWD to a Fight,” Serra and Fabia engaged in a verbal back-and-forth. The conversation occurred after the founder of the “School of Self-Awareness” approached the UFC Hall of Famer at breakfast to air a grievance.

Fabia had taken exception with an interview where Serra allegedly failed to mention him by name and used a condescending tone when talking about him. Seemingly feeling disrespected, Fabia called Serra out while he was eating with former UFC fighter Din Thomas.

The verbal altercation was captured on video by Thomas.

“When it was brought up in the interview and they asked you about me, you were able to see my name. You know that they are talking about me. You’re actually saying on a camera, like, you’re disdained with me so much that you can’t even same my name, bro. That’s kind of cold.”

“Like I told you earlier, I don’t even know your name,” Serra responded. “What’s your name again? Joshua, OK, good. (From) the ‘School of Something or Another.’ I understand you. Listen, you know why (I’m talking like this)? Because my friends and I are having breakfast and you try to come over here and make some kind of grandstand.”

“This is not going to get any better,” Serra said. “Do your thing. Good luck with you. I hope you make some money off of Diego. Do what you gotta do and that’s it, bro. OK? (You’re) not my type of guy. Do your thing.”

Fabia’s unusual training methodologies have caught the attention of many inside the MMA circle, though Sanchez (30-12 MMA, 19-12 UFC) and longtime UFC fighter Stephan Bonnar have high praise for Fabia.

Check out the full exchange between Serra and Fabia in the video above.

Photos: Matt Serra through the years 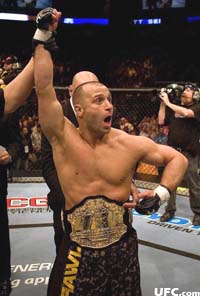 Photos: Diego Sanchez through the years